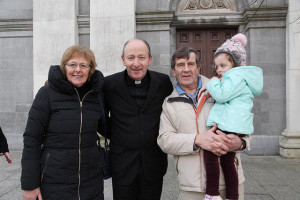 The Bishop of Waterfrod & Lismore has said that the Church must continue to teach the truth about marriage in spite of May’s referendum result.

Bishop Phonsie Cullinan made his call as he addressed a meeting of the Iona Institute in Dublin on Saturday on the topic ‘Teaching the Truth about Marriage’.

The Bishop said he was sure many people though things were just the same except that marriage had now been extended to include two men or two women who love each other and wish to ‘tie the knot’.

However, he said he saw the decision as an “error”, not because he wanted to demean any person but rather because of a concern for the common good and “God’s revealed will”.

He also questioned whether the State really cares about marriage in view of the fact that the State itself does not have marriage preparation courses for couples.

“One could legitimately ask does the State really care about marriage or was the referendum a convenient and relatively cheap way of seeking popularity in order to be recognised as progressive and modern,” he remarked.

However, he was also critical of the Church’s own marriage preparation courses, describing them as “very inadequate”.

The Bishop also underlined that rising individualism means that “commitment to marriage is decreasing”.

He urged Catholics to, “Continue to advocate for society to recognise that the permanent, fruitful, faithful union of one man and one woman makes a unique contribution to the common good, and so deserves — once again — unique protection and support in law.”

“This will, in the short term, create more room for social tolerance of this venerable view of marriage, and in the long term, make the day come sooner when, inevitably, this decision will come undone. I know that I as bishop must teach the whole truth about marriage and nothing but the truth,” he said.

Speaking to CatholicIreland.net, Bishop Cullinan criticised the fact that the media had referred to Savita Halappanavar’s unborn child as a foetus but when the Duchess of Cambridge announced her pregnancy the media had spoken of the ‘royal baby’.

He wondered whether family breakdown is contributing to the homelessness crisis and called for a study to investigate whether there was a connection.

On the issue of contraception, Bishop Cullinan said it had done “huge damage to the relationship between man and woman by separating sex from procreation”.

“How many of our people, young and not young, have been badly affected by casual sex and empty relationships?” he challenged.

Elsewhere in his address, the Bishop of Waterford and Lismore called for family-friendly policies such as extended maternity leave and additional support for mothers who wish to stay at home with their children.

The purpose of the Iona Institute conference was to examine the implications of the marriage referendum for the future, to examine the referendum itself, to look at upcoming issues like surrogacy, and to try and map the way forward from here.

The conference was also addressed by Professor Brenda Almond on the issue ‘Does a child have a right to a mother and father?’; Dr Catherine Kavanagh on the topic ‘How same-sex marriage came to Ireland’; Dr Thomas Finegan on ‘The revolution in family law’; Gregor Puppinck on ‘The case against surrogacy’ and David Quinn on ‘Where to from here?’

In her address, ‘Does a child have a right to a mother and father?’, Professor Brenda Almond, Emeritus Professor of Moral and Social Philosophy of the University of Hull, said there was a strong research basis for saying that children benefit in terms of health, education and emotional development when they have a mother and father who live with them in the family home on a committed long-term basis.

Addressing the issue of whether a child has a special need for its mother that is stronger and more biologically significant than any other relationship, she said, “There is no reason to doubt the widely held view that a child who lacks the warm physical bond of mother-love has lost something which can only be partially compensated for by others, if at all.”

The new era of cooperating procreation, including the possibility of egg donation and surrogacy, has brought new complexities into the picture in which conflicting claims may cast doubt on the notion of ‘mother’ itself.

According to Professor Almond, at a minimum a child is owed information about the special circumstances in which it came to be born and parents and doctors are wrong if they conspire to conceal a matter which is so fundamental to identity.

She warned that the assumption that a parent, male or female, is a forbear, ancestor and half a person’s genetic heritage is being replaced with the idea that whether or not someone is a parents is something that is socially determined and it legal recognition is a matter for the state.

“Many people fail to realise the dramatic shift of authority from nature to law that this transfer of parenthood embodies.”