Summary : This feast had its origin in the East as the “Conception of Mary by Saint Anne.” It spread through the West during the Middle Ages as the “Immaculate Conception” and was extended to the entire Western Church in the eighteenth century. The feast celebrates Mary, preserved from sin from the moment of conception as the first fruits of her Son’s redemption and a prophetic model of what the Church is called to be. 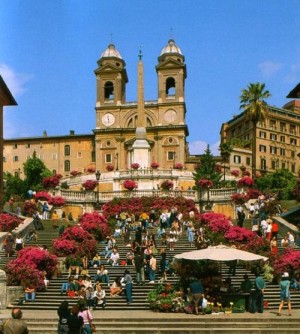 Every Dec.8th the Pope goes to Piazza di Spagna in Rome to commemorate the definition of this doctrine in 1854.

A statue of Our Lady of the Immaculate Conception was designed at that time by Luigi Poletti and placed on the top of an ancient Roman column overlooking the beautiful Spanish Steps. c/f image left

Each year at the ceremony a fireman of the Rome Fire Brigade climbs the ladder and places a wreath of flowers on the arm of Our Lady above the Spanish Steps in Rome. c/f image left

Patrick Duffy outlines the history and doctrine of the feast.

What the doctrine of the Immaculate Conception means is that from the first moment of her conception, God, foreseeing and anticipating the merits of Jesus’s passion and death, and knowing Mary would say “yes” to becoming the Mother of the Saviour, filled her with grace, and preserved her free from all stain of original sin. The Church assumes Mary herself was conceived in the normal way through loving intercourse of her father Joachim with her mother Anne. The date of the solemnity is co-ordinated with that of Mary’s Nativity on 8th September (nine months later).

The names of Mary’s parents
The names and tradition about Mary’s parents, Anne and Joachim, come from the apocryphal gospel of St. James and the apocryphal gospel of the Nativity of Mary (2nd century). The tradition is that Anne was the youngest daughter of a priest Nathan from Bethlehem, descended from the tribe of Levi. She married Joachim, who was a native of Galilee. She was childless for twenty years, but after the fervent prayer of both spouses, they had a daughter who would bring blessings to the whole human race.
Anne is the patron of childless women, pregnant women, and grandmothers;
Joachim is the patron of grandfathers. Both have their joint feast on 26th July.

A brief history of the feast
The emperor Justinian had a basilica built in Constantinople to honour St Anne; it was dedicated in 550. The Greek Church has kept a feast of the Conception by St Anne of the Most Holy Theotokos on 9th December from that time. Anne’s feast was celebrated at Canterbury from 1100 and there is a prayer for the feast of the Immaculate Conception in the Sarum Missal (11th century). France, Spain and Germany have the same feast from around the same time. In 1476 Pope Nicholas IV approved the feast for Rome with its own Mass and Office. This was confirmed in 1568, when Pope St. Pius V published the Roman breviary for the universal Church. There is widespread evidence for the celebration of the feast in Ireland in the 17th century.

Disputed theology
The doctrine of the Immaculate Conception was a matter of dispute in the Middle Ages. It is surprising that such champions of Mary as St Bernard and St Thomas Aquinas did not see any theological justification for it as a theological opinion. Eadmer of Canterbury (1064-1124), the companion and secretary to St Anselm, presented an argument from congruity (fittingness) that Mary was free from original sin, using the Latin axiom: Potuit, decuit, ergo fecit (“God was able to do it; it was appropriate; therefore He did it”). 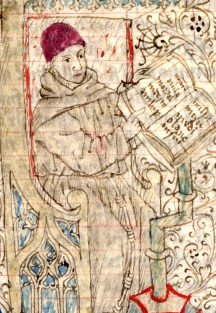 It was the Scottish-born Franciscan theologian Blessed John Duns Scotus (1265-1308) who formulated the argument from reason in favour of the doctrine. His approach was to start with Jesus, saying it would have been incongruous that the flesh from which the Son of God was to be formed should ever have been subject to the influence of the Evil One, whose power he came on earth to destroy. Then Scotus moves to the universality of original sin as expressed by Paul in Romans 5:12: “It was through one man (Adam) that sin came into the world, and through sin death, and thus death has spread through the whole human race because everyone has sinned.” That would seem to indicate that Mary needed to be redeemed.

But at Mary’s conception Christ, the sinless one, had not yet accomplished the redemption. So Scotus argued for a ‘pre-redemption’ that preserved Mary free from original sin through God anticipating and foreseeing the merits of her Son’s passion and death. This was possible for God who is outside time. The question remaining was: when did this happen in time for Mary? When was she, a daughter of Adam, preserved from original sin and its consequences?

To deal with this question, Scotus made a distinction between the order of nature and the order of time. With Mary, conception and sanctification were simultaneous, producing a twofold situation at the first moment of her existence. Mary, as a human descendant of Adam and Eve, would have contracted the debt of original sin, but simultaneously by a privileged infusion of grace and by a special anticipation of the merits of the Saviour, she became a daughter of God, and was preserved from the consequences of the common lot of fallen nature. 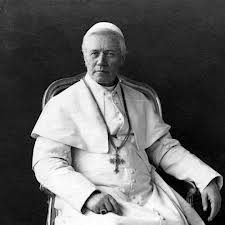 This argument of John Duns Scotus cleared the path for the theological acceptance and development of the doctrine and paved the way for its solemn definition by Blessed Pope Pius IX. In 1849 he consulted the faithful and bishops of the world about the appropriateness of defining the doctrine and received a largely positive response.

The core of the definition was expressed in the Constitution Inneffabilis Deus in 1854:

“We declare, pronounce, and define that the doctrine which holds that the most Blessed Virgin Mary, in the first instance of her conception, by a singular grace and privilege granted by Almighty God, in view of the merits of Jesus Christ, the Saviour of the human race, was preserved free from all stain of original sin, is a doctrine revealed by God and therefore to be believed firmly and constantly by all the faithful.”

Visions
It is worth noting that in 1830 St Catherine Labouré experienced a vision in which she saw Our Lady standing on a globe with rays of light emanating from her hands. The vision was surrounded by an oval frame on which were the words, ‘Oh Mary conceived without sin, pray for us who have recourse to thee’.

Also noteworthy is that four years after the definition,when Our Lady appeared at Lourdes to Bernadette Soubirous, Bernadette asked her, “Would you kindly tell me who you are?”, she replied:
“I am the Immaculate Conception“.

Iconography
Eastern Orthodox Christians believe that Mary was without sin for her entire life, but do not accept the formulation of the doctrine that the Mother of God was exempted from the consequences of original sin at the moment of her conception by virtue of the future merits of Her Son. However, many icons depicting the Conception by St Anna show Mary as the Most Holy Theotokos trampling the serpent underfoot.

The Baroque era
This theme was not highlighted by painters of the Baroque era. For example, El Greco, Murillo, and Zubaran all made paintings of the Immaculate Conception, showing Mary as the beautiful woman of Revelation 12:1 “clothed with the sun and the moon under under her feet“, but no serpent under her feet as the text of Genesis 3:15 (Vulgate) used in the definition might have suggested.

Crushing the serpent’s head
This way of depicting this mystery seems to have appeared in the West only after 1854, when a statue depicting Mary crushing the serpent’s head under her feet, commissioned by Pope Pius IX and designed by Luigi Poletti, was erected at the southern end of Piazza di Spagna in Rome. Every year on 8th December the Pope presents a wreath to honour at the statue with an officer of the Roman Fire Brigade climbing a ladder and putting it in place. It is this statue which has been the model for artists depicting the Immaculate Conception ever since.