Many of us are faced with a choice between the stairs or the lift on a daily basis. In her quest for holiness, St. Thérèse of Lisieux famously compared her own spiritual efforts with such a choice. As a young Carmelite nun, who entered religious life at fifteen by special dispensation, she set about becoming a saint by trying to take heaven by storm. But she failed.

Less than perfect
We should always aspire to perfection, but sometimes we torment ourselves in our attempts to reach heaven. Somehow we believe that our Creator will settle for nothing less than the best.  When we discover, as we do in so many different ways, that we are less than perfect, our grand plan for sanctity often implodes. 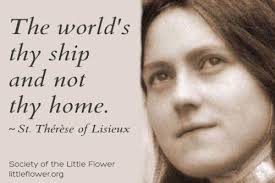 It is a predicament that arises out of an unrealistic view of ourselves. But even more seriously, it is rooted in a false idea of God. We should take heart, however, from the fact that Thérèse found herself in a somewhat similar cul-de-sac when her initial valiant efforts to become holy failed.

Never one to throw in the towel, the indefatigable young religious from Normandy came to the logical conclusion that there had to be another approach. She had, after all, a desire to become a saint. And she knew from reading St John of the Cross that God would never allow desires that could not be fulfilled.

Yet she was not measuring up to the great saints like Paul, Augustine and Teresa of Avila. So she had to take stock.

An elevator for little souls
Thérèse eventually concluded there was a place in heaven for little souls as well as the great ones: “I understood that our Lord’s love is revealed as perfectly in the most simple soul who resists his grace in nothing, as in the most excellent soul”. It was then a matter of finding another route to sanctity: “one that was very straight, very short and entirely new”.

By way of illustration she seized upon what was then a recent invention, the lift: the elevator “I wish to find an elevator which would raise me to Jesus, for I am too small to climb the rough stairway of perfection”. Thérèse searched the scripture for the elevator. 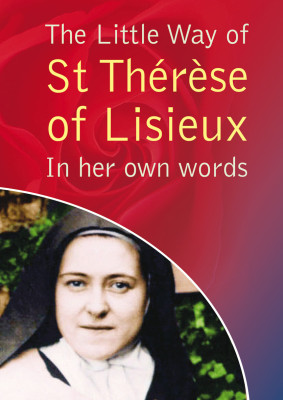 The lift to holiness
Thérèse found the “lift” for which she was searching: “The elevator which must raise me to heaven is your arms, O Jesus!”. But there was one condition. Rather than growing up, she was to remain little. She was to accept her powerlessness, and have boundless trust in the divine mercy.

Nothing, not even her imperfections, was to discourage her any more. “God remembers we are only dust,” she said. “As a father has compassion for his children, so the Lord has compassion on us!” She would later say to one of her novices, “What offends him and what wounds his heart is the lack of confidence“.

The little way
The “little way” of St Thérèse is centred on the infinite mercy of God, and recognises that everything is a grace. Since it believes that Providence is in control from moment to moment, it means proactively embracing the will of God in every detail and circumstance of our life.

Once established in her new doctrine, Thérèse observed, “Jesus is doing all in me, and I am doing nothing”. She was no longer trying to save herself, stumbling on the “stairs“. Now she was in the “lift“, being rapidly made holy by the grace of God.

Because everything is a grace, Thérèse came to realise that God has no need of our works. But the “little way” is not an invitation to do nothing.

She also knew that, paradoxically, we prove our love by works. But she was also aware that works without love count for nothing. Within the walls of the then little-known Carmelite convent in Lisieux, she would become the greatest saint of modern times by her self-surrender to “Merciful Love“, and by “not allowing one little sacrifice to escape, not one look, one word, profiting by all the smallest things and doing them through love“.

Confidence and gospel living
The “little doctrine” of St. Thérèse is new, in that it represents the basic gospel truth of salvation in a fresh and ingenious way. I sometimes like to think of it as the great parable of the Prodigal Son writ large. For it was the deep insights of Thérèse into the divine love, that gave rise to her so-called little way of spiritual childhood. Thérèse came to equate God’s love with the mercy of God. Thus, she sometimes referred to it as “Merciful Love“. And her insights gave rise to an audacious confidence in the mercy of God.

Like St. Paul, Thérèse’s doctrine teaches us how to look upon our imperfections in a positive way. It encourages us to accept ourselves as we are, and even to rejoice in our weakness.

Thérèsian hope is actually based on an awareness of our spiritual poverty. Of course, that does not mean we are to make light of our sins. On the contrary, we must see our faults and failings for what they are. And once they are clearly identified we must acknowledge our guilt before God.

We must repent and do our best not to repeat them. But equally the “little way” insists that we are not to brood, despair or become impatient over them. We can certainly learn to distrust ourselves because of them, and to be more aware of our tendency for self-seeking. But the secret is to surrender ourselves to the mercy of God with total confidence – and without delay!

Confidence
Confidence is pivotal in the “little way”. It is the key to unlocking the transforming power of God’s great mercy. It guarantees a loving response from our merciful and self-effacing Creator who, so touchingly, is always waiting to stoop down and share the divine life with us, if we but ask. 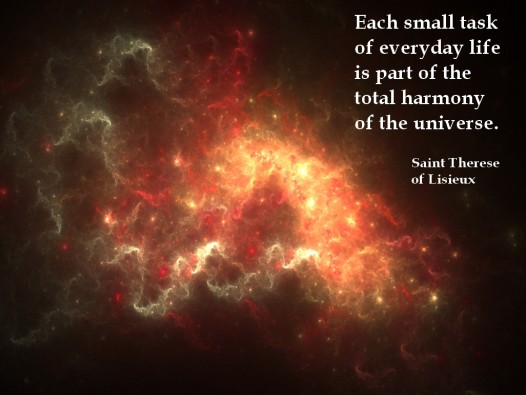 Abandonment
Confidence has a close companion called abandonment. Indeed, Thérèse sometimes uses the words interchangeably. Once established in the humility and confidence of the “little way” we gradually learn how to approach life with an attitude of self-surrender to the will of God.

The gospel incident about Jesus’ “true kinsmen” was one of Thérèse’s favourites (Mk.3:31-15). In her beautiful poem, Why I love you, Mary, Thérèse anticipated the Second Vatican Council when she. refers to Our Lady as her Son’s first disciple:

‘Who is my brother, who my sister, mother?
He is that who does my will,’ Jesus the Saviour said.

Each moment counts
Theresian abandonment means embracing in advance whatever one is confronted with in life – happy or sad – in each passing moment. There is no lamenting the past or worrying about the future.

It is the true measure of our confidence and the ultimate proof of our love for God. Nowhere is it more poignantly expressed, than in Jesus’ prayer in Gethsemane: ‘let your will be done, not mine’ (Lk 22:42).

Clearly, it is not always easy, but once inside the “lift”, all things are possible.

This article first appeared in The Messenger (October 2003), a publication of the Irish Jesuits.c/f   www.messenger.ie/bookshop/