Summary: St Zita, patron saint of domestic servants and those engaged in household chores. Many miracles are associated both during her lifetime and for those who have had recourse to her after she died. She is specially honoured in the Basilica of St Frediano (reputedly an Irish saint, possibly could be Finian-o) in Lucca in northern Italy.

A domestic servant in Lucca 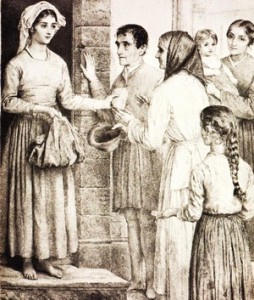 Zita was born at Montsegradi, a village near Lucca, Italy, at the beginning of the thirteenth century. Her mother raised her in the love and fear of the Lord. Her older sister became a Cistercian nun and her uncle Graziano was a hermit whom the local people regarded as a saint. At an early age, Zita went to work as a domestic servant for a rich family called Fatinelli in Lucca. Each morning she would awaken early and pray before attending Mass.

Diligent and trustworthy
Because she worked so hard, Zita’s fellow servants thought she was trying to shame them. They became very jealous of her and were mean to her at every opportunity. But they soon found that Zita was not mean-spirited as they were, but a genuine saint. The Fatinelli family put her in charge of the household and made her the governess of their children.

Angels watch over her baked bread while she prays
One day after putting some bread in the oven to bake, Zita went up to her “chapel” in the attic to pray. The sweetness of being with God was so delightful that Zita lost all track of the time. When she came to her senses, she rushed back to the kitchen, sure that the bread would be burned and the kitchen full of smoke. But instead she found the beautifully smelling freshly-baked bread laid out on the kitchen table. Were the angels watching over her baking while she talked with God?

Generous to a fault

Zita was generous to a fault even with what did not belong to her. She shared her own food with whoever came to the Fatinelli household door and sometimes would even give food from the pantry to the many hungry beggars who came looking for help. When Signor Fatinelli became aware of this, he became enraged. One day when he found that Zita had given away the entire store of dried beans from the pantry, he dragged her into the pantry to show her what she had done. Miraculously, though, and to his shock, when they got to the pantry, the full store of the dried beans was replenished.

The fur mantle and the Angel Door
Another story tells of Signor Fatinelli finding Zita heading off to Mass on a cold Christmas morning without a coat. He gave her his own fur mantle and wrapped it around her as she went out, but said, “Remember, I want that back.”  At Mass Zita met a poor beggar and giving him the mantle said, “This will keep you warm for now.” After Mass she went to get the mantle, but the beggar had gone. One can imagine Signor Fatinelli’s rage when Zita returned home from Mass to explain why she had no mantle. But the day after Christmas, a stranger came to the Fatinelli’s door with the fine fur mantle, good as new. Neighbours recognised that this was no ordinary beggar, but an angel come to test the compassion of the local Christians. The door where Zita gave the mantle to the beggar is still to this day called the Angel Door.

Her death and veneration
Zita died on the 27th April in the year 1272, aged sixty. She had served the Fatinelli family for forty-eight years. A judicial process has approved one hundred and fifty miracles that were wrought in behalf of those who had recourse to her intercession.

Body preserved
In 1580 Zita’s body was found, whole and entire, and it is kept with great respect richly enshrined in St. Frediano’s Church in Lucca, Italy, next to the Fatinelli house where she worked. Her face and hands, uncovered, can be viewed through the crystal glass. Pope Leo X granted an office in her honour, and the city of Lucca pays special veneration to her memory.