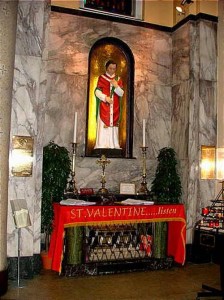 Summary: There is a beautiful shrine to St Valentine in the Church of Our Lady of Mount Carmel, Whitefriar Street, Dublin, where his relics are also kept.

Patrick Duffy tells about the celebration of his feast and some stories about the saint.

How many Valentines?
At least three different Saint Valentines, all of them martyrs, are mentioned in the early martyrologies under date of 14th February. One is described as a priest at Rome, another as bishop of Interamna (modern Terni);  both seem to have suffered in the second half of the third century and to have been buried on the Via Flaminia, but at different distances from the city. Of the third Saint Valentine, who suffered and died in Africa with a number of companions, nothing further is known. 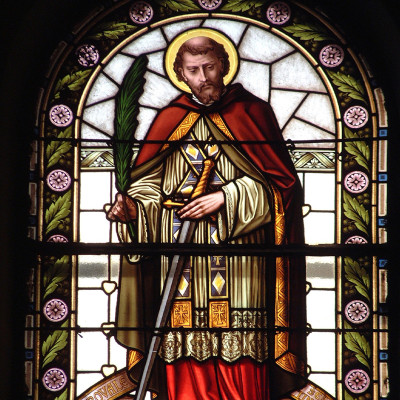 A man of faith, passion and bravery and loyalty to his word.

Celebration of the feast
It may be that the cult of the two Italian Valentines – one based in Rome, the other in Terni – became fused or confused. Both are listed on 14th February in the the current Roman Martyrology (2004 – the Catholic Church’s official list of saints), but in the revised General Calendar for universal liturgical celebration (1969) the celebration was removed, possibly because of a lack of accurate historical information; it is probably seen as belonging more to the realm of popular piety than liturgical celebration. However, St Valentine is celebrated liturgically as a simple feast by Traditional Roman Catholics who use the Roman Missal (Tridentine Rite) of Pope John XXIII (1962).

A feast for lovers
The popular customs associated with Saint Valentine’s Day as a feast for lovers – sending flowers, tokens of love and Valentine cards – may have come from the belief that on 14th February, that is, half way through the second month of the year, the birds began to pair. In Chaucer’s Parliament of Foules we read:
‘For this was sent on Seynt Valentyne’s day
Whan every foul cometh ther to choose his mate.’

Valentine’s relics in Dublin
Relics of St Valentine are venerated in the Carmelite Church in Whitefriar St in Dublin. The history given is that in 1835 Fr John Spratt, the then Prior of the Carmelite Church in Whitefriar St, Dublin, on a visit to Rome received the relics of St Valentine martyr from Pope Gregory XVI (1835) and installed them in his church, where they became an object of great devotion. The website of the Irish Carmelites tells two stories about Valentine which give some indication why this devotion developed.

Story 1. Why St Valentine is patron of lovers
The first story locates the story of Valentine’s patronage of lovers in a tradition of ancient Rome. 14th February was a holiday to honour Juno – the Queen of the Roman Gods and Goddesses. The Romans also knew her as the Goddess of women and marriage. The following day, February 15th, began the Feast of Lupercalia, an early form of Carnivale or Mardi Gras. 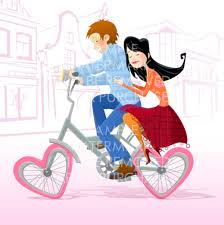 Although in ancient Rome the lives of young boys and girls were strictly separate, one of the customs associated with the eve of the festival of Lupercalia was name drawing: the names of Roman girls were written on slips of paper and placed into jars. Each young man would draw a girl’s name from the jar and they would then be partners for the duration of the festival. Sometimes the pairing of the children lasted an entire year, and sometimes they would fall in love and would later marry.

Under the rule of Emperor Claudius II (268-270 AD), Rome was involved in many bloody and unpopular military campaigns. Claudius was having a difficult time getting soldiers to go to the army. He believed the reason was that Roman men did not want to leave their loves or their families. As a result, Claudius cancelled all marriages and engagements in Rome. But Valentine was a priest who would secretly marry any couples who came to him. For this he was taken captive and brought before the Prefect of Rome, who condemned him to be beaten to death with clubs and to have his head cut off. He suffered martyrdom on the 14th February, in either 269 or 270.

Story 2. Valentine’s power of healing and the origin of Valentine cards
Another story about St Valentine may explain the origin of the custom of giving flowers and a card on St Valentine’s Day. One day the emperor’s jailer came to Valentine’s house clutching his little blind daughter in his arms. He had heard that Valentine had healing powers and begged him to treat his daughter’s blindness. She had been blind since birth. Valentine knew that her condition would be difficult to cure but he said he would do his best. After examining the little girl, he gave her father some ointment for the girl’s eyes and asked him to bring her back again.

The father, seeing Valentine was a man of learning, asked whether his daughter, called Julia, could also be brought to Valentine for lessons. Valentine told the girl stories of Rome’s history and described the world of nature. He taught her arithmetic and told her about God. She began to see the world through his eyes, trusting in his wisdom and finding comfort in his strength. One day she asked if God really existed and Valentine assured her that He did. She went on to tell him how she prayed morning and night that she might be able to see and Valentine told her that whatever happened would be God’s will and would be for the best. They sat and prayed together for a while. The girl’s sight was not restored, but the prison guard and his daughter never wavered in their faith and kept coming back each week. But one day, Valentine was arrested by Roman soldiers who destroyed his medicines. When the little girl’s father learned of his arrest and imprisonment, he wanted to intervene but there was nothing he could do.

Knowing his execution was imminent, Valentine asked the jailer for a paper, pen and ink. He quickly jotted a farewell note and handed it to the jailer to give to his blind daughter. He urged her to stay close to God, and he signed it: “From Your Valentine”. Next day he was put to death.

When the jailer went home and met his little girl, she opened the note and found a yellow crocus inside. The message said: “From your Valentine”. As the little girl looked down upon the crocus that spilled into her palm she saw brilliant colours for the first time in her life! The girl’s eyesight had been restored.

It is said that Julia herself planted a pink-blossomed almond tree near his grave. Today, the almond tree remains a symbol of abiding love and friendship. 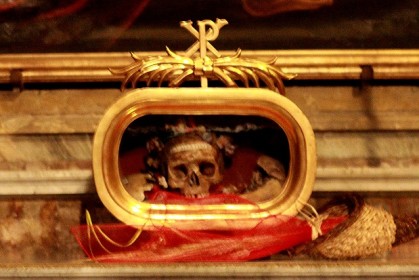 A small glass box containing a beflowered skull that held all the thoughts of St. Valentine himself – if you believe the label affixed to its forehead!