Summary: St Thérése of the Child Jesus, Virgin, Doctor of the Church. Born at Alençon (France) in 1873; died of tuberculosis on 30 Sept. 1897. Coming from a devout family, she entered a Carmelite monastery at fifteen, where she embraced the suffering of her ill-health with love and in service to the missionary spread of the gospel. Known through her popular autobiography and loved for her unaffected simplicity, humble obedience and fidelity to her ordinary duties as the path to sanctity.

St Thérèse shows us the power of humility and of her “little way” spirituality to advance in holiness. In Jesus’s garden of souls, she saw herself as “a little flower“.

hérèse was born at Alençon, the youngest of five daughters of Louis Martin, a watchmaker, and his wife Azélie-Marie Guérin, who died when Thérèse was four years old. The family moved to Lisieux and in her mother’s absence Thérèse looked to her elder sister Pauline as a mother. Thérèse was nine when Pauline entered the Carmelite monastery at Lisieux and she missed her. A second sister Marie followed. By the time Thérèse was fourteen, she too wanted to enter. She went with her father to Rome to appeal to Pope Leo XIII and although the Pope’s reply was non-committal, she was allowed to enter the convent a year early for her age. She took the name of Thérèse of the Infant Jesus.

The “little way”
Convent life was difficult for Thérèse. The prioress was severe and she herself had doubts about her vocation. But Thérése found what she called her “little way” – not trying great mortifications, but accepting everything and doing God’s will with great love, convinced that she was a “little soul“. This was her way of combating the temptation to pride.

Thérèse was appointed assistant novice mistress and she set down her “little way” in a book, The Story of A Soul, that became enormously popular when it was published (although with some doctoring) by the Carmelites soon after her death. An extract shows us how she came to be called “The Little Flower”.

‘Jesus set before me the book of nature. I understand how all the flowers God has created are beautiful, how the splendour of the rose and the whiteness of the lily do not take away the perfume of the violet or the delightful simplicity of the daisy. I understand that if all flowers wanted to be roses, nature would lose her springtime beauty, and the fields would no longer be decked out with little wild flowers. So it is in the world of souls, Jesus’ garden. He has created smaller ones and those must be content to be daisies or violets destined to give joy to God’s glances when He looks down at His feet. Perfection consists in doing His will, in being what He wills us to be.’

Contact with missionaries
A missionary gave Thérèse a copy of the Life and letters of Venerable Théophane Vénard, a priest of the Paris Foreign Missionary Society, who had been martyred in Vietnam some years previously. She was inspired by his example to volunteer for the new Carmelite monastery in Hanoi. But her health was declining from the tuberculosis she had contracted, so that was not on. However, she wrote a series of moving letters to two missionaries in Vietnam.

Her death and influence
The last eighteen months of her life were a slow and painful agony. Besides the physical breathlessness and discomfort, she experienced a real dark night of the soul. Most of the pages of her book were written at this time. 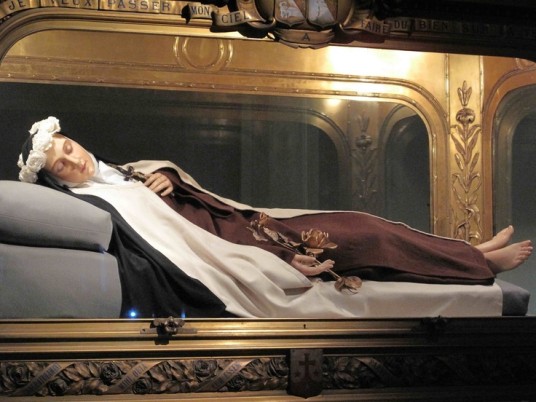 She died on 30 September 1897, clutching the relic of Venerable Théophane. She became hugely popular when her book, The Story of a Soul, was published and many cures took place through her intercession. People loved the simplicity of her “little way”. When Pope Pius XI canonised her in 1925, he proclaimed her principal patron of all missionaries. In the centenary to mark her death, Pope John Paul II declared her a doctor of the Church.