Summary:  Rupert belonged by birth to the Franco-Merovingian royal household. He may have been influenced by the Irish monks who came to the continent under Columbanus. He gained a reputation for holiness while preaching at Worms on the Rhine towards the end of the seventh century.

The image left shows a postage stamp depicting a statue of St. Rupert, the founder and first bishop of the city of Salzburg. In his hand he is holding a salt bucket as he had promoted salt-mining and the salt trade: Salz is the German word for salt, so Salzburg is Salt Castle. The statue was created by Franz Hitzl around 1778 for the high-altar of the church of St. Peter’s Abbey in Salzburg.

A missionary in Bavaria
Theodo, Duke of Bavaria, hearing of  Rupert’s reputation for holiness, invited him to come to Bavaria to instruct his people in the faith and to revive, confirm, and propagate the spirit of Christianity there. Despite the work of early missionaries, Bavaria was only superficially Christian; its very Christianity was indeed to some extent Arian, while pagan customs and attitudes were closely interwoven with the Christianity which it had retained. Rupert accepted, and in 696 baptised Theodo and his household in the town of Ratisbon (Regensburg). He had some success in restoring the region to Christianity. In the following years, under the patronage of Theodo and his son Theodobert, Rupert preached throughout Bavaria, and succeeded in converting or re-converting all that region.

A missionary in Salzburg
Rupert asked Theodo for permission to build a church at the ruined ancient Roman town of Iuvavum. 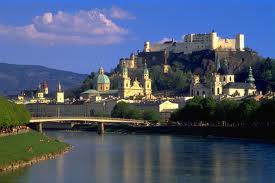 The ancient Roman town of Iuvavum gives way to Saltburg

Theodo agreed, and Rupert founded the abbey of St. Peter with a school and a church attached at Mönchberg. He also set up a convent at Nonnburg, where his niece, Erentrude, became the abbess. They are the oldest continuing monastery and convent in the German-speaking world. Around the monks and nuns who accepted Rupert’s call grew up the town which Rupert re-named “Salzburg” or “Salt Castle”, deriving its name from the barges carrying salt on the Salzach river.

His death and influence
Rupert combined in his own person the dignities of abbot and bishop. His remains were interred in a crypt in St. Peter’s Church. Rupert is often depicted carrying a bag or barrel of salt. The Irish monk St Virgil (Feargal) came to Salzburg in 767. Between that and 774 the cathedral was built there and was later dedicated to St Rupert and St Virgil. St Rupert is revered as the Apostle of Bavaria and Austria.