Summary St Rose of Lima, Virgin, Mystic. Born at Lima (Peru) in 1586; died there on 24 August 1617. Noted for her radiant love of God and for the severe penance and hardships she endured during serious illness. She was the first saint of the Americas to be canonised (1671).

Rose lived an extraordinary life of holiness and self-denial. A recluse and mystic, she chose not to marry, joined the Dominican Third Order and modelled herself on Saint Catherine of Siena.

She is the first canonised saint of the Americas. This South American Saint’s real name was Isabel, but she was such a beautiful child that she was commonly called by the name ‘Rose’

A beautiful child
She was born in Lima, Peru,   and named Isabel De Flores Y Del Oliva on 20 April, 1586. Her father was a Spaniard, and her mother of native Peruvian blood. Isabel was a sickly baby but soon grew healthy and beautiful. Her family was poor, and hoped that Isabel, growing into an extremely attractive young woman, would marry well and assist the family. From childhood Isabel was nicknamed Rose for her looks and rosy cheeks, she was more taken up with the religious world than the secular.

Rose took a vow of chastity and modeled herself on St Catherine, devoting herself to a life of self-denial. Despite the ridicule of friends and family, she continued to practice extreme forms of religious observance. She fasted and became a vegetarian, mortifying her flesh with hard work and going so far as to rub lye or lime into her hands, pepper on her face and skewer her head with a long pin instead of the roses her mother put there. She wanted to turn attention away from her own beauty and focus it on God. 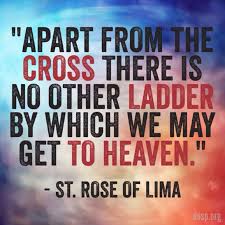 She flogged herself, wore a hair shirt and slept little. It took her many years of prayer, fasting, hard work and secret penances before her family reluctantly agreed to let her become a member of the Third Order of St Dominic, taking vows of poverty, at twenty. She moved out of her family home into a small grotto built on their property, where she continued to devote herself to the care of the poor and infirm. She helped her family with her fine workmanship and was known for her lace-making.

A figure of contradiction
Rose gladly offered up her suffering, atoning for the idolatry of her country, for the conversion of sinners, and for the souls in purgatory.  Some people were enthusiastic in their praise of her, while others scorned her life.

Following her death at thirty-one, her funeral could not take place for days because the people of Lima thronged to see her body. She was buried in the cemetery of the Dominican convent. Later, as a number of miracles were attributed to her, her remains were moved to the church of San Domingo, where was laid to rest in a special chapel.

Big feast-day in Peru
Rose of Lima was beatified by Pope Clement IX in 1667 and canonised in 1671 by Clement X, the first canonised saint of the Western hemisphere. Great celebrations attend her feast day in the city of Lima.