St Munchin, Bishop, Abbot. Munchin is the patron saint of the diocese of Limerick. He is known only from Dalcassian genealogies and seems to have been born in Dal Cais, where a parish and old graveyard Cell Mainchin (Kilmanaheen) existed. In the seventh century he was granted Inis Sibtonn (Ibton) in the tidal waters of Limerick, in the region of which he founded a church and had a thriving religious community.

Mainchín mac Setnai (fl. late 6th century), also anglicised to Munchin, was allegedly the founder of the church of Luimneach, Ireland, and a saint in Irish tradition, acquiring special eminence as patron of Limerick City.  Both his origins and the date of his association with the city are debated.  He  is also the patron saint of Brug Ríg, now Bruree, the former royal seat of the Uí Fidgenti. 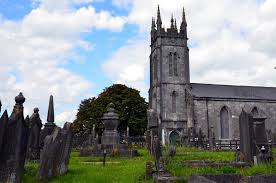 Through his father Sétna, Mainchín is alleged to belong to the Dál Cais, given a pedigree linking him to the ancestors of the O’Brien dynasty. His tutor was the Corco Mruad saint Mac Creiche according to the Life of that saint.  Mainchín is said to have founded Luimneach when Ferdomnach, king from the Dál Cais, granted him land at Inis Sibtond. He was often referred to as Munchin the Wise. but he is commonly known as Maincin, or little monk. When he was granted Inis Sibtonn in the tidal waters of Limerick,  he founded a church and had a thriving community.

In the Martyrology of Donegal, Mainchín’s feast day occurs on 29 December. In Bruree, his feast day is commemorated on 2 Jan., The Roman Martyrology also lists Jan. 2 as Mainchín of Limerick’s memorial.

(History note: A major problem with the above is that the Dál Cais themselves are unknown by that name before the 930s and are believed by scholars to be the descendants of a Déisi population which migrated into the region at an uncertain period. Before the Dál Cais the greater region appears to have been dominated for a time by another people entirely, the Uí Fidgenti, who eventually found themselves much displaced by the Dál Cais in the second half of the 10th century and following, although after having previously overrun many of the Déisi themselves in the very same territories.)