Summary of St Louise: She was the foundress of the Daughters of Charity. Depressed after an unhappy marriage and the death of her husband, Louise found a new challenge when Vincent de Paul asked her to gather and train “country girls” in a mission to help the poor. 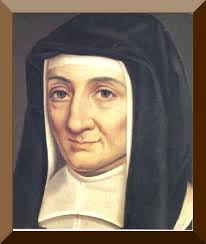 Louise came from a distinguished family of the Auvergne region of France. She was born between the first and second marriages of her father, who recognised her as his daughter and thus removed much of the stigma then attached to her illegitimacy. He also made financial provision for her education in a Dominican convent, but when he died, she was put in the care of a “poor spinster” – possibly her natural mother – who ran an informal orphanage.

Her marriage
Although she wanted to be a nun, Louise’s spiritual director discouraged her, saying she had too much chronic ill health. She married Antoine le Gras, an official in Queen Marie de Medici’s service. Although Louise was a dutiful wife, it was a somewhat loveless marriage. When the Queen was banished, Antoine lost his job and was without income. The son born to them was slow-witted and awkward. Antoine’s health failed and he died. Louise went through much self-doubt, seeing her position as a punishment for not following her wish to become a nun. 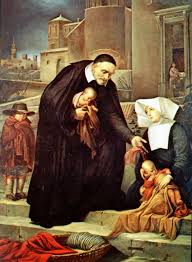 Meeting Vincent de Paul
She made a vow not to remarry and also three religious vows of poverty, chastity and obedience, but she found no outlet for her spiritual energy until, in her late thirties, through Francis de Sales, she met Vincent de Paul.  He and his “priests of the mission” were funded and helped by the “Ladies of Charity” – a group of aristocratic women, who supplied funds for and worked with the poor in parishes under Vincent’s direction. But being aristocratic they lacked the ability to get inserted among the poor at their own level.

“Country girls”
Louise saw here a task she found challenging. She and Vincent both felt that “country girls”, artless and egalitarian in spirit, would be more suited to working with the poor. She attracted, recruited and trained so many of these that they soon had several houses in Paris and in the provinces. 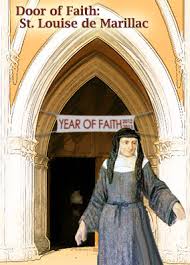 Since their work was to be where they were most needed, they could not become a religious congregation in the strict sense. So they simply lived in small communities and took annual vows of poverty. Louise knew the qualities needed for the exhausting work and Vincent helped their development through monthly conferences encouraging even the newest and shyest recruits to express how they saw their mission.