Summary: St Kieran’s mother came from Cape Clear in Co Cork, his father from Ossory. Kieran was one of the pre-Patrician saints of Ireland. Traditions say he went to Rome, was ordained by the Pope and was sent back to Ireland by Patrick. He is called ‘the Elder’ to distinguish him from St Ciarán of Clonmacnoise. 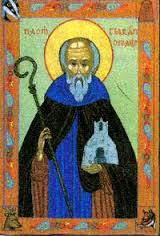 Kieran (Irish Ciarán) of Saighir is known as the “first-born of the saints of Ireland”. Most of what we know about him comes from various Lives which were written down much later, so that while they are primarily intended to edify and entertain, it cannot either be concluded or excluded that the Lives reflect what actually happened.

Kieran, Ailbe, Declan and Ibar
In one of the Lives of Ciarán it is claimed that “before Patrick there were none to maintain faith and belief in Ireland but Kieran, Ailbe, Declan and bishop Ibar”. These four were from the southern half of the country and this tradition may reflect faith interaction with Christians of south Wales before St Patrick came to Ireland.

Kieran coming back from Rome met St Patrick
Kieran set out for Rome, where he was baptised and studied scripture there “under the abbot of Rome”. On his way back to Ireland it is said he met St Patrick, who told him exactly where to found his settlement, giving him a bell which would only ring when he found the place. This turned out to be Saighir Chiaráin, near the village of Clareen about four miles south-east of Birr, Co Offaly. 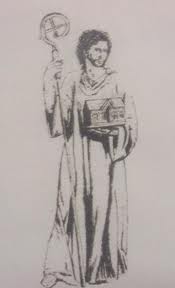 The animals his first monks
Like John the Baptist, Kieran is a wilderness figure, dressed in the skins of wild animals.  Another story is that he blessed a well so that “it had the taste of wine or honey for everyone who drank it got drunk as well as filled”.

It is said that his mother Liadán came with some women and established a community at Saighir also.

Saighir Chiaráin
Saighir Chiaráin was the chief church of the Osraighe for some time. There is a monastic site with sacred well and the saint’s bush still very popular at the place near Clareen in Co Offaly. For more see. However, ecclesiastically Seir Kieran seems to have been superseded by the later monastic foundation of St Canice at nearby Aghaboe. And it was Canice who was to be the patron of the church established by the Normans in the city of Kilkenny. This later became St Canice’s cathedral in Irishtown, Kilkenny, presently held by the Anglican Church of Ireland. 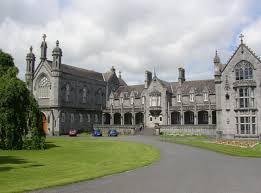 St Kieran’s College, Kilkenny
In the twelfth century the Canons Regular of St Augustine were established at Saighir Kieran. After the penal times, in 1782, Bishop John Thomas Troy of Ossory (later archbishop of Dublin) established a Catholic diocesan seminary, St Kieran’s College, in Kilkenny. The motto he gave it was: Hiems transiit, a quotation from the Song of Songs applied to the passing of the winter of the Penal Laws in Ireland. When the Catholic cathedral was built in 1843, although it was called St Mary’s, it also has Kieran as its secondary patron and Kieran is the patron saint of the Catholic diocese of Ossory.