Summary: St Juan Diego, also called Cuauhtlatoatzin (” talking eagle”), was a devout childless widower, who was converted by the first Spanish Franciscans who arrived in Mexico. He had a vision of Our Lady on 9th December 1531 and had a shrine set up there which encouraged the conversion of the indigenous Mexicans to Christianity.

Baptised at 50
Juan Diego was born in 1474 near Mexico City . He was a gifted member of the Chichimeca people, one of the more culturally advanced groups living in the Anáhuac Valley. When he was about 50 years old he was baptized by a Franciscan priest, Fr Peter da Gand, one of the first Franciscan missionaries.

The story is that on 9th December 1531 he was walking past the sacred hill ‘Tepeyac’ on his way to Mass, when he heard a voice calling him from the hill. He climbed up and found an olive-skinned girl about fourteen year of age, who told him she was the Virgin Mary. She asked him to go to the Spanish Franciscan bishop-elect, Juan de Zumárraga, and tell him she wanted a church built on the spot. The bishop-elect asked for a sign to prove that the apparition was true. On 12th December, Juan Diego was passing by Tepeyac on the 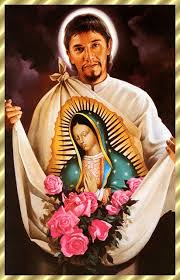 way to see his uncle who was sick. Here, the young woman appeared to him again and told him his uncle was cured. she also told him to climb the hill and to pick the flowers that he would find in bloom. He did, and although it was winter time, he found roses flowering.
He gathered the flowers and took them to Our Lady who carefully placed them in his tilma or mantle and told him to take them to the bishop-elect, tell him what he had seen, explain how his uncle was cured, and that she was Our Lady of Guadalupe. When he opened his tilma in the presence of the bishop-elect, the flowers fell on the ground and an image of the Blessed Mother, the apparition at Tepeyac, was impressed on the tilma.

Our Lady of Guadalupe 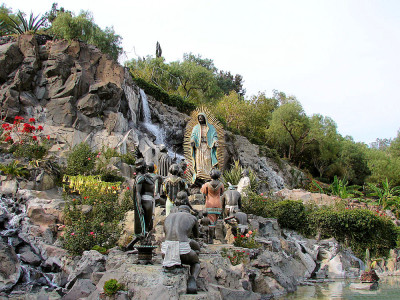 This origin of this title has been a matter of controversy. The more reliable opinion would see it as a Spanish mistranslation of the word “Coatlallope” of the Nahuatl language, meaning “one who treads on snakes” indicating that this young woman would bring an end to the human sacrifice culture of which the snake was symbolic!

Our Lady of Guadalupe has become Mexico’s most popular image. 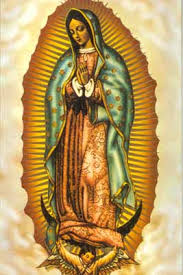 Others would see it as evoking the shrine of Our Lady of Guadalupe in the Extramadura region of Spain. This had a miraculous statue reputed to have been carved by St Luke the evangelist and given to Saint Leander, archbishop of Seville, by Pope Gregory I. When Seville was taken by the Moors, a group of priests fled northward and buried the statue in the hills near the Guadalupe River in the Extremadura region. It was rediscovered at the beginning of the 14th century and a shrine grew up around it. Many of the conquistadors who came to Mexico were from that region.

The Shrine
Juan Diego lived the rest of his life as a hermit in a small hut near the chapel where the miraculous image was placed for veneration. Here he cared for the church and the first pilgrims who came to pray to the Mother of Jesus. He dedicated his life to prayer, the practice of love of God and neighbour. He died in 1548 and was buried in the first chapel dedicated to the Virgin of Guadalupe. He was beatified on 6 May 1990 by Pope John Paul II in the Basilica of Santa Maria di Guadalupe, Mexico City and canonised on 31st July 2002.

The Marian image at Guadalupe 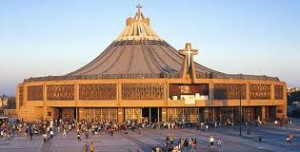 The miraculous image, which is preserved in the Basilica of Our Lady of Guadalupe, shows a woman with native features and dress. She is supported by an angel whose wings are reminiscent of one of the major gods of the traditional religion of that area. The moon is beneath her feet and her blue mantle is covered with gold stars. The black girdle about her waist signifies that she is pregnant. Thus, the image graphically depicts the fact that Christ is to be “born” again among the peoples of the New World, and is a message as relevant to the “New World” today as it was during the lifetime of Juan Diego.