Summary: St Hugh of Lincoln was born in Burgundy, France. He spent the first forty of the sixty years of his life in France and the last twenty as an abbot and later bishop in England.

It was King Henry II who looked for Hugh of Lincoln in an effort to make reparation for his murder of St Thomas Becket. Hugh was an advisor to the kings who followed Henry II, John and Richard I.

Magna Vita S. Hugonis
St Hugh of Lincoln is known to us from a contemporary biography by Abbot Adam of Eynsham, who was his chaplain and confessor during the last four years of his life. Completed 13 years after his death as part of the preparations for his canonisation – a relatively early cause to be referred to Rome for official and universal authorisation – this is known as the Magna Vita S. Hugonis.

Early life
Hugh was born at Avalon. His mother died when he was just eight years old. His father William retired to an Augustinian monastery near Grenoble and took his son Hugo with him. Here he received a good education and found himself attracted to monastic life and  made his profession in the Augustinians when he was 15. 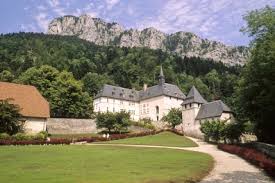 From Augustinian to Carthusian
A visit to the monastery of La Grande Chartreuse in the French Alps east of Grenoble changed his life. Despite having promised that he would not leave his Augustinian priory – a promise he decided had been made under duress – he did just that and became a Carthusian, at the age of 23. After 10 years when nothing is recorded of him except his love of and affinity with animals, he became procurator and guestmaster.

A visitor from England
In 1180, one of his visitors was the bishop of Bath in England. King Henry II of England had sent him to invite Hugh, of whom he had heard from a French nobleman, to complete the foundation of a Carthusian monastery (charterhouse) at Witham Abbey in Somerset. Henry had promised to do this as part of his reparation for the murder of Thomas Becket ten years earlier. After consulting the Carthusian chapter, Hugh agreed to go.

The building of Witham Abbey
The building work on the abbey had not even begun. Those on whose land it was supposed to have been built had not been compensated in any way. Hugh insisted on this being done first. He then oversaw the building, persuaded Henry to meet the costs, overcame local prejudice, and attracted suitable candidates as monks.

Bishop of Lincoln
King Henry came to depend on Hugh for advice, which he gave straight from the shoulder. Henry rewarded his forthrightness by pressuring the dean and chapter of Lincoln to elect him as their bishop. This large diocese, stretching from the Humber to the Thames, had been without a bishop for almost 18 years. Henry’s policy was to keep sees vacant and thus prevent the Church from becoming too powerful. Hugh at first tried to decline the post, but the prior of La Chartreuse advised him to accept. He was the only Carthusian ever to have been a bishop in England.

Building the cathedral and pastoral care 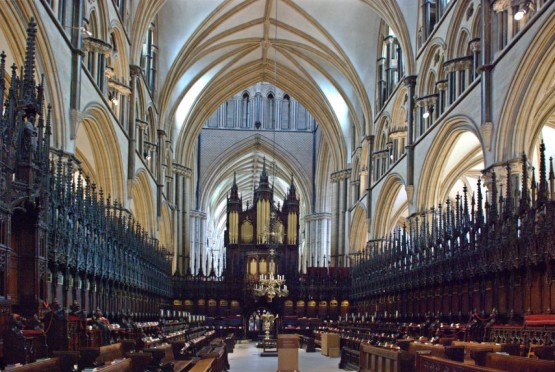 Hugh set about restoring order to his new diocese with his characteristic blend of firmness and kindness. He set an example of dedication, travelling ceaselessly, building up pastoral care wherever he went. He found the great cathedral of Lincoln in ruins, badly damaged by an earthquake in 1185, and oversaw its restoration and extension. He was responsible for the overall design and sometimes actually worked on the building himself. He was reputed to be the most learned monk in England, but he was also cheerful, enthusiastic, fond of conversation and even of children.

Concern for justice
Hugh’s concern for justice extended beyond his dealings with three kings – Henry II, Richard I and John – to defence of Jewish communities during an outbreak of anti-Semitism during the Third Crusade. He upheld the Church’s right not to pay a levy to help Richard’s war against France, rebuking him to his face when he seized the bishop of Salisbury’s goods when he refused to pay. His principles involved him in a long dispute with Hubert Walter, archbishop of Canterbury, always inclined to take this king’s side, and in mediating in several other long-running ecclesiastical power struggles.

Kings Richard and John
Hugh followed King Richard to France in an attempt to resolve the dispute over seizure of church property to finance his war against France and was staying at a monastery near Angers when news reached him that the king intended to turn against him, closely followed by news that he was mortally ill from an arrow. He went to the abbey of Fontevrault, where Richard was to be buried, arriving just in time to take part in the funeral service. Richard’s heir, John, was recognised as such in France, and Hugh spent considerable time and effort in counselling him on the duties of a Christian prince – to little avail! He then returned to England, but the following year, shortly after John’s coronation, the king sent Hugh back to France to witness the Peace of Le Goulet, designed to end hostilities between John and Philip of France. By now Hugh’s health was failing, and on his return journey he stopped to pray at the tomb of Thomas Becket in Canterbury. He struggled on to London, where he was forced to take to his bed in the house belonging to the bishops of Lincoln in what is now Lincoln’s Inn. 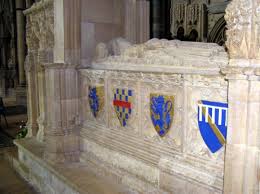 Death and canonisation
Hugh died there after two months of suffering, on 16th November. His body was taken to Lincoln in a great six-day triumphal procession. His funeral was attended by three archbishops (including his former foe from Canterbury), fourteen bishops, the Kings of England and Scotland, a Welsh prince, a hundred abbots and the people of Lincoln, including representatives from the Jewish ghetto. The King and bishops of England pressed for his canonisation – the Carthusians did not consider it right to seek such an honour – and he became the first saint of his order in 1220.

His shrine in Lincoln Cathedral was a place of major pilgrimage until the Reformation, when it was dismantled. His remains have never since been found.