Summary :St Gertrude, Virgin. Born about 1256; died at Helfta (Germany) about 1302. Entrusted from five years of age to Benedictine or possibly Cistercian nuns, among whom she experienced a deep conversion at the age of twenty-five and lived a life of mystical contemplation. Found Christ in the liturgy and Scripture, and on this foundation developed her devotion to the humanity of Jesus and, together with it, a love of the heart of Jesus.

St Gertrude the Great, a 13th century mystic, belonged to the Benedictine monastery of Helfta (near Eisleben in eastern Germany).

Two Gertrudes and two Mechtilds – each famous in their own right – were associated with this convent. Recently a new convent has been built on the site and a new chapel in honour of St Gertrude the Great opened and blessed.

Patrick Duffy sets the context in which St Gertrude the Great lived. 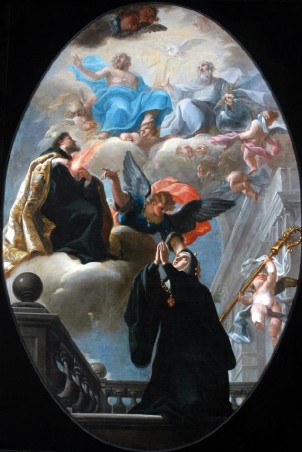 The mystics of Helfta
During the second half of the 12th century, the Benedictine convent of Helfta (near Eisleben) experienced a fertile development of the mystical life and mystical writings. Under the founding abbess Gertrude of Hackeborn (1223-92, not to be confused with Gertrude the Great), the sisters received an intense education in the liberal arts, and especially in the Bible. Abbess Gertrude’s younger sister, St Mechtild of Hackeborn, was the headmistress of the convent school and famous for her musical talents. She greatly influenced the education of St Gertrude the Great. The monastery, although a Benedictine foundation, followed Cistercian customs. Another person associated with Helfta was the beguine Mechtild of Magdeburg (1207-82), who was accommodated at the convent for the last twelve years of her life and wrote an important work entitled The Surging Light of Divinity.

An uprooting – nothing known of her family
Gertrude (the great) was born on 6th January 1256, but nothing is known of her parents nor of the place of her birth. She was placed at the age of five in the care of the nuns of Helfta. Gertrude wrote that the Lord himself revealed to her the meaning of this first uprooting: “I have chosen you for my abode because I am pleased that all that is lovable in you is my work…. For this very reason I have distanced you from all your relatives, so that no one may love you for reasons of kinship and that I may be the sole cause of the affection you receive” (The Revelations). 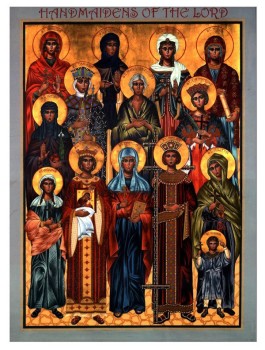 A good liberal education in the care of nuns at Helfta

Gertrude received a good liberal education at Helfta, being thoroughly grounded in the trivium (grammar, logic and rhetoric) and the quadrivium (arithmetic, geometry, music and astronomy). She also learned to speak and write Latin   and Greek fluently and translated parts of the Bible into German.

She tells us about her youthful passions: literature, music and song and the art of miniature painting. She had a strong and impulsive temperament. Some features of her temperament and faults stayed with her to the end of her life, so as to amaze certain people who wondered why the Lord had favoured her with such a special love.

Conversion at twenty-five
At the age of twenty-five she had a deep conversion experience, which she describes – addressing Jesus – in Book II, Chapter 1, of her Herald of Divine Love. It took place on 27th January 1281:

“I was in my 26th year. The day of my salvation was the Monday preceding the feast of the Purification of your most chaste Mother, which fell that year on the 27th of January. The desirable hour was after Compline, as dusk was falling. My God, you who are all truth, clearer than all light, yet hidden deeper in our heart than any secret, when you yourself resolved to disperse the darkness of my night, you began gently and tenderly by first calming my mind, which had been troubled for more than a month past. This trouble it seems to me served your purpose. You were striving to destroy the tower of vanity and worldiness which I had set up in my pride, although, alas, I was – in vain – bearing the name and wearing the habit of a religious…. From that hour, in a new spirit of joyful serenity I began to follow the way of the sweet odour of your perfumes (Song of Songs 1:3) and I found your yoke sweet and your burden light (Matt. 11:30) which a short time before I had thought to be unbearable!”

Mystical experiences
After this Gertrude had many visions and mystical experiences which took place during the liturgy and the Divine Office. She lost interest in secular studies and devoted herself to Scripture, the liturgy and the Fathers of the Church. From being a grammarian, she became a theolgian. She had a great devotion to the humanity of Jesus in his Passion and in the Blessed Eucharist. In this she was a forerunner of what later became devotion to the Sacred Heart.

Writings
The mystical writings Gertrude left include The Herald of Divine Love, The Revelations, and The Spiritual Exercises. During the autumn of 2010 Pope Benedict devoted his Wednesday audience talks to the women mystics of the Middle Ages and their writings. See his talk on St Gertrude the Great.

Death and influence
Gertrude died after an illness in 1302. She was never formally canonised, but Pope Innocent XI added her name to the Roman Martyrology in 1677, and in 1738 at the request of the King of Poland and the Duke of Saxony, Pope Clement XII extended her feast to the Universal Church.

Monastic life restored at Helfta today
During the Reformation, the convent of Helfta, was secularised, but in 1999 eight Sisters from Seligenthal – a Cistercian convent in Bavaria – started to build a new convent on the site and to restore monastic life there. Today, eighteen women live, pray, and work there and women are invited to share monastic life for shorter periods of time. In 2008 a new chapel in honour of St Gertrude the Great was opened and blessed.