Summary of St Flannan, Bishop Flannan lived in the seventh century and was the son of a king of Thomond. He entered Molua’s monastery at Killaloe and seems to have become abbot there. He is remembered as a powerful preacher. 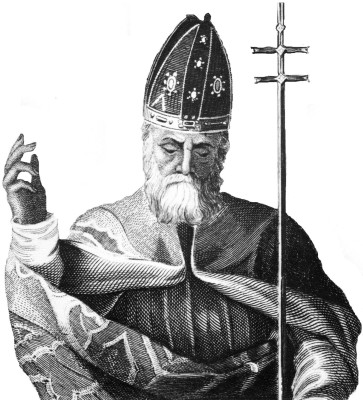 St Flannan is the patron saint of the diocese of Killaloe. This diocese includes large portions of the counties of Clare and North Tipperary; it also includes smaller portions of Offaly, Laois, and Limerick. The diocesan cathedral of Saints Peter and Paul is at Ennis. Portraits of Saints Flannan and Senan accompany those of Sts Peter and Paul in  the sanctuary.

Patrick Duffy summarises some traditions about the saint’s life.

St Molua (554-609)
St Molua was reputed to have been the first abbot and founder of Killaloe. He was born in Ardagh, Co Limerick, where the parish church is called after him. On a visit to Munster, St Comhghall, Abbot of Bangor, found him asleep in a field where he was tending his father’s flocks and recognising the boy’s holiness, took him with him to Bangor. There he studied for the religious life and was ordained a priest. Molua is said to have founded monasteries at his home place Ardagh in Co Limerick, at Killaloe, at Friars’ Island near Ardnacrusha (covered in 1930 by the damming for the hydroelectric scheme), at Cluain Fearta Molua (Kyle, north of Borris-in-Ossory Co Laois) on the Leinster/Munster border near his mother’s home. There is also a Church of St Molua (Church of Ireland) in the Stormont area of east Belfast. 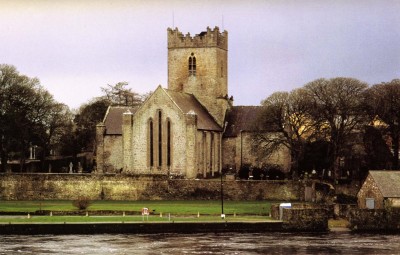 St Flannan is said to have been the son of Turlough, King of Thomond, and also Molua’s nephew and first disciple.  There is a story that one day, after he had been baking continously for thirty-six hours, a heavenly light shone through the fingers of his left hand. It lit up the darkness to enable him to continue with his task. Molua, on learning of this, decided to retire from his position and appointed Flannan as abbot in his place. The image (above)shows St. Flannan’s Cathedral, Killaloe.

Travels to Rome and Scotland?
Flannan was noted for his hospitality and the people of Thomond agreed he should become bishop. He is said to have made a trip to Rome where he received consecration from Pope John IV (640-2). There were churches dedicated to him at Inishlannaun in Lough Corrib and another on Inishbofin. The Flannan Islands in the Outer Hebrides may be connected to his cult. However, it is not certain that the Scottish Flannan is the same as the Killaloe Flannan. There is a possibility that there was a second saint called Flannan.

Propaganda?
Former diocesan historian, Fr Ignatius Murphy (died 1993), referring to the abundance of legends about St Flannan, dismissed the medieval life as historically valueless and said we have very little hard information about him. Murphy maintained that Flannan lived in the 8th century, possibly in West Clare, and that the prominence given to him was due to family pride and propaganda on the part of the kings of the Dal gCais in the 11th and 12th centuries. 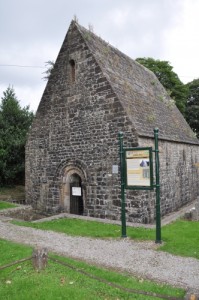 However that may be, St Flannan emerged as the patron of the diocese of Killaloe. The Church of Ireland Cathedral in Killaloe is called after him as is the diocesan college, St Flannan’s, Ennis.

When the diocese was established at the Synod of Rathbreasail in 1111, it was made up of three separate dioceses which had been founded around three abbeys: Killaloe, under Saints Molua and Flannan; Roscrea, founded by St Crónán (d. 665); and Scattery Island (Inis Cathaigh), founded by St Senan.

Other monks venerated locally as saints include: St Brendan of Birr, St Caimin of Inis Cealtra in Lough Derg and St Ruadhán of Lorrha, Co Tipperary, near Portumna.