Summary:  St Conleth  is believed to have come from the Wicklow area. While living as a hermit he was persuaded by Brigid to act as priest for her community in Kildare. He was venerated as a saint and Cogitosus in his Life of Brigid calls him bishop and abbot of the monks of Kildare. He was buried beside Brigid in her patronal church there. 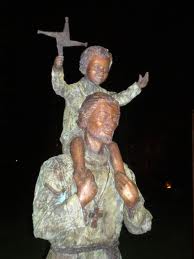 St Conleth is the patron saint of Droichead Nua (Newbridge), Co Kildare. He was a metal-worker in silver and gold who had a hermitage there.  St Brigid called him to assist her at her foundation in Kildare and to be its bishop.

Metal-worker and hermit at Old Connell, Newbridge
We do not know where Conleth was born or who his parents were, but we do know from Cogitosus’s Life of Brigid (c. 650) that he was a skilled metal-worker in gold and silver who lived as a hermit at Old Connell on the Liffey near Newbridge. He had the reputation of being a very holy man with the gift of prophecy. He is also said to have been the sculptor of the crozier of St Finbar of Termonbarry, Co Roscommon.

First bishop of Kildare 490
The tradition is that Brigid invited him not only to make sacred vessels for her foundation but also to be pastor of the people nearby. Cogitosus says that they governed the church at Kildare “by means of a mutually happy alliance”. And so Conleth is regarded as the first bishop of Kildare appointed 490. 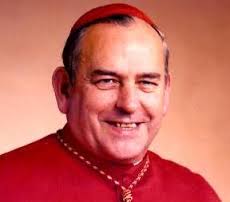 A model of governance?
Indeed, speaking to the Synod of Bishops in Rome in October 1987, Cardinal Tomás Ó Fiaich, then archbishop of Armagh, drew attention to this alternative form of governance in the Church where Brigid (the woman) took the initiative and held the primacy or an authoritative role, while Conleth (the man) took a more secondary, executive and liturgical role.

Pilgrimage to Rome?
After about twenty years as bishop, Conleth set out on a pilgrimage to Rome. Because he was now an old man Saint Brigid feared for him going on this journey. Somewhere on the journey in Ireland Conleth was attacked and killed by wolves, which at that time lived in the woods and mountains of Leinster. A gloss in an Irish martyrology saying he was devoured by wolves on his journey to Rome undertaken against the wishes of Brigid may be an attempt to explain his name, i.e. coin ‘wolves’ and leth ‘half’. 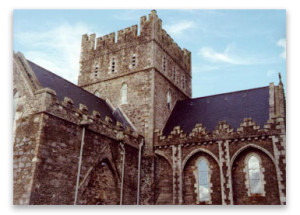 Saint Conleth died on the 3rd May 519 AD. The tradition in Kildare holds that he was buried on the left side of the altar in the Church of Ireland cathedral in Kildare town and Saint Brigid on the right. The tradition in Newbridge holds that he was buried in the Old Connell graveyard. An alternative version is that his relics were transferred there in 835 to protect the inhabitants from Danish invaders. He is the patron saint of the parish of Droichead Nua (Newbridge), Co Kildare.

Remembrance
A water garden dedicated to St Conleth designed as a contemplative space and constructed by Martin O’Neill, “Crookedwood”, is situated on the left hand side of the parish church in Newbridge. It contains a bronze statue of St Conleth by Annette McCormack carrying on his shoulders a child holding up a St Brigid’s cross. See image above.

Annual pilgrimage
Every year on the Sunday after St Conleth’s Day a pilgrimage takes place from the parish church in Newbridge to Old Connell, about two miles outside the town.