Summary: St Clement I, Pope, Martyr. Clement died in New Testament times, at the end of the first century. His name is included in Eucharistic Prayer I (The Roman Canon). Noted for a letter written from the Church at Rome to the Church at Corinth, an important witness to the emergence of ministries and authority in the Church and to the pastoral responsibility of Rome to another Church.

The Basilica of San Clemente in Rome, near the Colossium has been in the custody of the Irish Dominicans for some centuries. It is a major historical and archaeological site.

Also among the letters to be seen there is sub-apostolic (just after the apostles time is a letter addressed to the Christians in the city of Corinth which is attributed to St Clement. Not much is known of the saint himself.

Patrick Duffy traces some of the strands of his story.

Named in the Roman Canon
According to the traditional order familiar from the Roman Canon of the Mass, Clement was the 4th pope after Peter, Linus and Cletus. He was one of the first generation of Christians after the apostles.

Philippians 4:3
Writing to the Philippians, Paul speaks of some women and others who helped him when he was fighting to defend the Good News. Among these he mentions “Clement and the others who worked with me. Their names are written in the book of life”. (It is possible though it cannot be proved that this is the same Clement.)

An Encyclical letter?
Eusebius of Caesarea, the great archivist of Christian beginnings tells us: “There is extant a letter of this Clement which is acknowledged to be genuine and is of considerable length and of remarkable merit. He wrote it in the name of the Church of Rome to the Church of Corinth, when a sedition had arisen in the latter Church. We know that this Epistle also has been publicly used in a great many Churches both in former times and in our own” (Ecclesiastical Histories 3, 16). 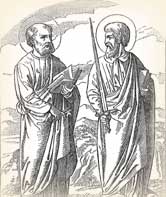 The letter written just after the persecution of Domitian had ended (after 96 AD) urges reconciliation and respect for the tradition of the apostles. However, we no longer know what the problem was that occasioned it. It is sometimes presented as a first exercise of the Roman primacy after St Peter’s death (Pope Benedict Audience 7.3.07). It contains a summary of Christian teaching divided into sections on the person and work of Christ; sanctification-justification; the Holy Spirit and the Trinity; the Church and ministry; liturgy; eschatology; the Christian life; scripture (meaning the OT) and gospel, Peter and Paul; apostles and martyrs. This last section provides a precious early witness to the fact of their martyrdom. The letter is an appeal for humility, peace and charity. 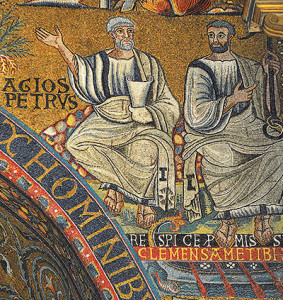 Ss Peter and Clement, detail of the twelfth century mosaic in the apse of the San Clemente Basilica, Via Labicana, Roma 95

Fathers of the Church
Irenaeus, writing in the 2nd century, claims that Clement received the teaching of the apostles at first hand, and Origen, some decades later, called him “a disciple of the apostles”.

Fourth century accounts held that Clement was exiled to the Crimea by the emperor Trajan, put to work in the mines, and eventually thrown into the sea with an anchor round his neck for making too many converts. Angels made him a grave on the sea bed, which was uncovered once a year by an exceptionally low tide. The story continues that St Cyril on his way to evangelise the Khazars miraculously recovered the relics of Clement’s body and the anchor in the Crimea and brought them to Rome in 868, and that Pope Adrian II placed them in the Basilica of San Clemente.

Art and patronage
In art, Clement is often shown with an anchor or with a tiara and 3-branched cross. The 9th century frescoes in San Clemente in Rome depict his life and legend.

In London the Church of St Clement Danes (the parish emblem of which is an anchor) is the best-known dedication to him in England. He is also patron of Trinity House in London, the body responsible for lighthouses and lightships in and around Britain.