Summary: St Ciarán of Clonmacnoise’s life, supposedly born Ciarán mac an tSaeir, was one of the Twelve Apostles of Ireland and the first abbot of Clonmacnoise. He is sometimes called Ciarán the Younger to distinguish him from the 5th-century Saint Ciarán the Elder who was bishop of Osraig 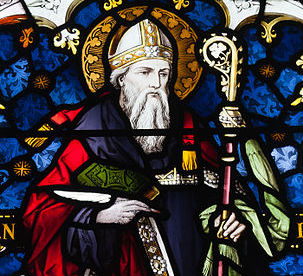 Clonmacnoise was founded by St. Ciarán, who was born around 512. His father was a travelling carpenter called Beoit and his mother was called Darerca. His father was a carpenter and chariot maker. Ciarán was born and reared in an area that is in the present-day Roscommon. He had a number of brothers and sisters. Some of them also entered the religious life.

Training with Enda and Senan
As a young boy, Ciarán helped his family herd cattle and studied his lessons while out in the fields. When he was older, he went to study with St. Finian at Clonard, which is in modern-day Meath. He later studied on Aran with St. Enda, and later to Senan of Scattery Island where he was ordained a priest. After spending time in various monasteries, Ciarán eventually founded his monastery at Clonmacnoise  in January of 544.

Foundation at Clonmacnois
Here he made his  foundation with ten companions on the Shannon River  but died at the age of 33 but while it was still being built. He became very ill with a plague and died, – a young man in his early thirties. His feast day is September 9, the date on which he died. Despite the young age at which he died, he had managed to found a monastic school whose fame would endure down the centuries. Clonmacnois that became famous throughout Europe.

Mac an tsaoir
The son of a carpenter or wheelwright, mac an tsaoir, Ciarán, is often called “the younger” to distinguish him from Ciarán of Saighir, called Sean Chiarán, or Ciarán the Senior.

Ciarán’s cow
This Ciarán was from Connaught and went to study under Finian of Clonard, taking with him his favourite cow, which his family donated for his education. The monastery could profit from milk and butter, calves, meat or from the hide that would be turned into parchment. The skin of Ciarán’s cow was preserved in his memory and was noted for miracles – it had the reputation that every man who died resting on it would get eternal life. And later, the book written on this famous cow-skin, Leabhar na hUidhre, became one of Ireland’s most important manuscripts. This is the book which preserves the legend of the Táin Bó Cuailnge. 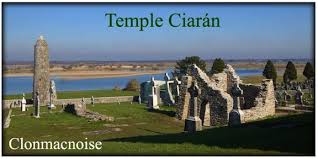 Influence
Clonmacnois later became one of the most influential monasteries in Europe. Alcuin of York (735-804), the most renowned of Saxon scholars who became an advisor at the court of Charlemagne, studied here under Colcu the wise in the eighth century. He wrote letters to him and sent presents from himself and the emperor. The monastery survived the Viking raids and the Norman wars up until 1552. 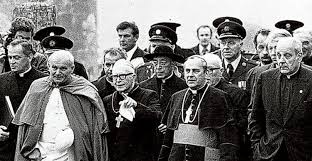