Summary: St Casimir, born at Krakow (Poland) in 1458, died in Lithuania on this day in 1484. Though a young prince of Poland, he preferred peace to being a soldier. He chose celibacy over marriage and favoured prayer and penance rather than royal privilege. Noted for his generous life of austerity and devotion. 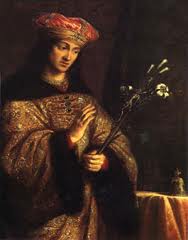 Although he lived in a world where he had to conform to the expectations of his father, Casimir was aware of other priorities – the love of God – and these were what he followed. In 1948 Pope Pius XII named him as patron saint of all youth. He was also the patron saint of Poland

A pious youth
Casimir born in 1458, was the second son of King Casimir IV of Poland. Tutored from childhood by a holy and modest man, Fr John Dlugosz of Cracow, the historian of Poland, he grew up as a devout and pious youth. When he was thirteen his father, at the request of one Hungarian faction, sent his son at the head of a large army to be king of Hungary, but at the border Casimir turned back and, to avoid his father’s anger, went to do three months penance to the castle of Dobski near Cracow.

His preference for a life of religious retirement
Influenced again by Fr John Dlugosz, he was reluctant to take up arms especially against Christians who were being pressed by the Turks. He also refused to marry a daughter of Emperor Frederick III and preferred a life of celibacy, religious retirement and penance.

Viceroy of Poland
His elder brother, Ladislaus, had by now become king of Bohemia, so his father initiated him into public life and when in 1479 the king went to Lithuania for five years arranging affairs there, Casimir was viceroy of Poland, and from 1481 to 1483 administered the state with great prudence and justice. He promoted peace and the unity of Western Europe.

Died en route to Lithuania
He became ill with a lung disease, which may have been due to his fastings and mortification. While on a journey to Lithuania, he died at the court of Grodno, 4 March 1484. and was buried in the chapel of the Blessed Virgin in the cathedral of Vilna. 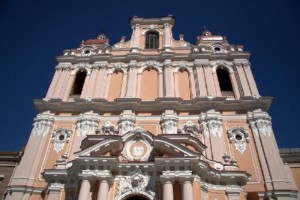 After his death he was venerated as a saint, because of the miracles reported at his tomb. He was canonised in 1522 by Pope Adrian VI and was named patron saint of Poland and Lithuania in 1602.

In 1948 Pope Pius XII named him as patron saint of all youth.