Summary: St Brendan of Birr was one of the twelve apostles of Ireland. He is best known for his friendship and support of St Columba, who had a vision of St Brendan being carried by angels to heaven at his death.

Studies with St Finian at Clonard 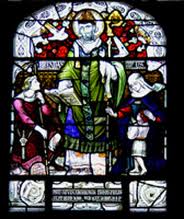 Brendan is said to have studied under St Finian at Clonard where he became a friend of St Columba and St Brendan the Navigator. He later made his own monastic foundation at Birr, Co Offaly.

St Adamnan in his Life of Columba (3:4) tells a story of Brendan of Birr’s support of St Columba when “he had been excommunicated for some pardonable and very trifling reasons, and indeed unjustly”. Columba was making his way to a gathering at Tailtean (Telltown – between Kells and Navan), Co Meath. Brendan, seeing him in the distance, quickly arose and went to him. He bowed down reverently and kissed him. Some of the seniors in the assembly drew apart from the rest, and began finding fault with Brendan.”Why did you not refuse to rise in presence of this excommunicated person? And to kiss him?” Brendan of Birr replied: “If you had seen what the Lord has this day thought fit to show to me regarding this his chosen one, whom you dishonour, you would never have unjustly excommunicated him, for he is a person whom God holds in high esteem.”

“How,” they asked, “can God exalt one whom we have rightly excommunicated?” Brendan replied: “I have seen a most brilliant pillar wreathed with fiery tresses preceding this same man of God whom you treat with contempt. I have also seen holy angels accompanying him on his journey through the plain. Therefore I do not dare to slight him, whom I see foreordained by God to be the leader of his people to life.”
The gathering immediately rescinded the previous excommunication.

Visit to Cashel and baptism of St Colman of Cloyne
About 580, Brendan went on a visit to Cashel for the inauguration of a new king of Munster. The royal bard at Cashel at that time was not a Christian and Brendan was the one to lead the liturgy for the occasion. During his visit also, the tomb of St Ailbe of Emly, buried there many years previously, was rediscovered on the site. The royal bard, greatly impressed by these experiences, asked to become a Christian. Brendan baptised him and sent him to St Jarlath of Tuam for further formation. He was Colman MacLenine, subsequently abbot of his own foundation at Cloyne, Co Cork.

Columba’s intuition of the death of Brendan
St Adamnan also tells a beautiful story about the closeness of Brendan and Columba. Early one morning on Iona Columba rose and instructed his servant Diarmuid to prepare for a celebration of the Holy Eucharist, in honour, he said, of the natalis (literally “birth day”, but meaning “birthday in heaven“) of blessed Brendan.” “Why,” asked Diarmuid, “do you want Mass prepared today since no messenger has come to us from Scotia (Ireland) to tell us of the holy man’s death?” “Go,” said the saint, “and do what I say. For last night I saw the heavens suddenly open, and choirs of angels descend to meet the soul of the holy Brendan; and so great and incomparable was the brightness that in that same hour it illuminated the whole world” (Adamnan’s Life of Columba, 3:12).

Influence: the Macregol Gospels (or The Book of Birr)
The deaths of the abbots of 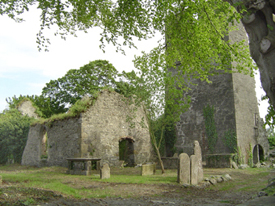 were recorded in the Irish Annals. One Macregol, successor to St Brendan, is listed as “scribe, abbot and bishop at Birr“, died in 822 AD. He had made a magnificent illuminated manuscript copy of the Four Gospels, the original of which is in the Bodleian Library, Oxford. Eight pages are illuminated in the style of about the eighth or ninth century AD like The Book of Kells. A facsimile copy has recently been made available in the Birr Town Library.
(The image, above right,  is of the Birr Old Churchyard, believed to be the site of the monastery founded by St Brendan.