St Ailbe is regarded as the patron saint of Munster and his church at Emly  was for long the province’s chief ecclesiastical centre. He is the patron saint of the joint archdiocese of Cashel and Emly with the see at Thurles. The last bishop of Emly was Blessed Terence Albert O’Brien O.P., martyred 1651. 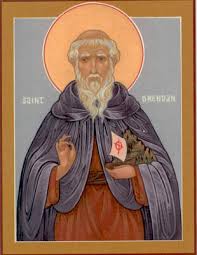 Both Ailbe’s name and the place where he founded his church have significant associations in their etymology and mythology.

Emly, Imleach Iubhair, perhaps takes its name, “the lakeside of the yew tree”, from a pre-Christian sacred yew tree at the place.

Ailbe itself was the name of a divine warhound guarding the boundaries of Leinster. Places such as Magh Ailbe, plain of Ailbe, on which stood the Lia Ailbe, the Standing Stone of Ailbe, are witness to this.

The name Ailbe is derived from the Irish words Ail (rock) and beo (alive). Ailbe was born to a maidservant in the house of Cronan, Lord of Eliach in County Tipperary. Cronan, for reasons unrevealed, disapproved of his birth and directed that he be exposed to ‘dogs and wild beasts, that he might be devoured’. But, instead, the baby was found hidden under a rock (Ail) and alive (beo), by a she-wolf who reared him among her own cubs. The saint repaid the kindness toward the end of his life when a she-wolf chased by hunters took refuge with him. He ordered that it should not be harmed, and would come to eat with him each day.

The name Ailbe is Latinized as Albeus, and sometimes anglicized as Elvis!

Received the faith from South Wales
Ailbe is frequently named as leader among the four “Palladian bishops” all of whom ministered in the south of Ireland – Ailbe of Emly, Ibar of Begerin, Declan of Ardmore and Ciaran of Saighir – before or around the time of the arrival of St Patrick.

Since Ailbe was also known in South Wales, it seems certain that before Patrick there was a movement of Christians between the south of Wales and the south of Ireland. And it may be from this movement that Ailbe received his Christian faith. Another source says he baptised St David of Wales.

Friendship with Declan: visit to Rome
Ailbe was particularly friendly with Declan. The Life of Declan says: “They loved one another like brothers…”  The Life also says they both went to Rome and were ordained bishop by the Pope. (Unlikely!) But it could be an indication of a later claim for authority for him or his see.

Emly and Cashel
The Life of Declan also deferentially declares: “Humble Ailbe was the Patrick of Munster….” He was considered to be one of the pre-Patrician saints of Ireland 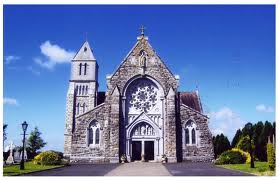 The church Ailbe founded at Emly in south-west Tipperary became a centre of  formation for other well-known monastic saints, such as St Colman of Dromore and St Enda of Aran island.

Ailbe is said to have petitioned King Aengus of Cashel for a site for a monastery for Enda. Unaware that he had islands in his domain, Aengus that night dreamed about them and granted them to Enda. (The ancient connection between the Aran Islands and the region of his kingdom may be discerned in the name Tiobarad Árann).

Another interesting story is that Ailbe’s tomb, long forgotten, was discovered in Cashel in 580 when St Brendan of Birr came on a visit to inaugurate the new king.

Emly later became an important ecclesiastical centre and diocese. In 1718 it was united with Cashel and St Ailbe is the patron of the joint archdiocese.

Ailbe’s monastic Rule
A ninth century monastic rule bears Ailbe’s name. It consists of 56 verses in Irish, including these instructions to a monk: 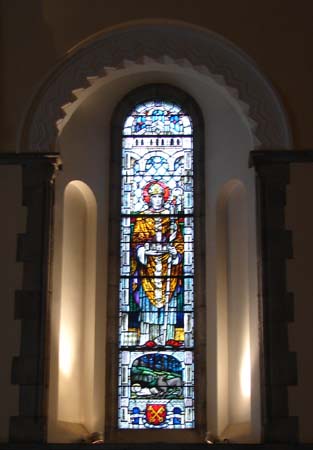 The jewel of baptism and communion, let him receive it.
Let him be constant at prayer, his canonical hours let him not forget;
let him bow it down without insolence or contention.
A hundred genuflections for him at the Beata at the beginning of the day… thrice fifty psalms with a hundred genuflections every hour of vespers.
A genuflection thrice, earnestly, after going in past the altar rail, without frivolity and without excitement, going into the presence of the king of the angels.
A clean house for the guests and a big fire, washing and bathing for them, and a couch without sorrow.

Death
According to the Annals of Innisfallen, which draws on records originally compiled at Emly, Ailbe died in 528.