St Augustine, said: "Angel is the name of their office, not of their nature."

Summary of Ss Ss Michael, Gabriel and Raphael, Archangels. The cult of Michael, Gabriel and Raphael began in the East. In the West, this day first marked the dedication of a fifth century church of Saint Michael in Rome. This festival of Michaelmas came to be very popular and widely celebrated in medieval Europe. Raphael and Gabriel were added to the Roman calendar in the twentieth century, and the three are now celebrated together. They are all mentioned in the Scriptures each is named as a messenger of God, entrusted with special divine missions on earth. 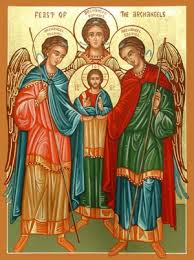 ‘Angel’ is a Greek word for “messenger”. We frequently read of angels in Scripture, but only three are named – Michael, Gabriel and Raphael. They are servants and messengers of God sent to perform a mission.

“Angel is the name of their office and not of their nature”, says St Augustine in todays Office of Readings.

Patrick Duffy tries to give some background to this feast.

A truth of faith
The existence of the spiritual, non-corporeal beings that Scripture calls “angels” is a truth of faith. The Catechism of the Catholic Church 330 gives this guiding statement, based on the Encyclical Humani generis of Pope Pius XII: “As purely spiritual creatures angels have intelligence and will: they are personal and immortal creatures, surpassing in perfection all visible creatures, as the splendour of their glory bears witness.” (More helpful, however, is the statement of St Augustine, repeated by Pope St Gregory the Great: “Angel is the name of their office, not of their nature.”)

Scripture
Angels in general frequently appear in Scripture, but only three are named – Michael, Gabriel and Raphael. They are traditionally called “archangels”. 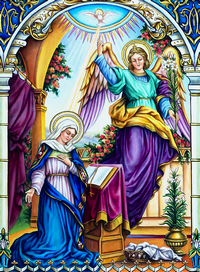 Gabriel (strength of God)
Gabriel brings the news of the birth of John the Baptist to Zachariah and Elizabeth (Lk 1:11-20) and news of the birth of Jesus to Mary (Lk 1: 26-38). Under the Arabic name Jibril, Muslims believe Gabriel was also the angel who revealed the Koran to the prophet Muhammad. Renaissance artists, such as Fra Angelico, El Greco and Leonardo da Vinci, have given dramatic representations of Gabriel in their Annunciations.  Gabriel is the patron of post office and telecommunications workers. 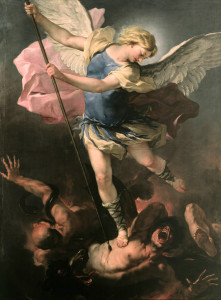 Michael is the powerful prince of the heavenly host assigned to battle with the devil and casts him down (Daniel 10:13 and 12:1; Rev 12:7-9). Pagan shrines to the Norse warrior soverign god Wotan, when Christianised, became dedicated to St Michael.

Holy high places – like Skellig Mhíchil off the Co Kerry coast, Mont San Michel in Normandy and St Michael’s Mountain near Penzance in Cornwall – have also taken him as their patron.

Sometimes also, he is the patron of cemeteries. In a dramatic sculpture outside Coventry cathedral, he is depicted in conflict with Lucifer, the fallen angel. 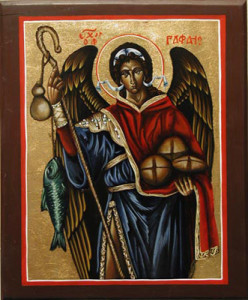 Raphael as referred to in the Book of Tobit and …

Raphael (“God heals”)
Raphael wiped away the blindness of Tobit and led Tobias to a happy marriage (Tobit Ch 6). Sometimes he is identified with the angel who moved the waters of the healing pool in Jerusalem (Jn 5:1-4). Raphael hasn’t made the same impression in art or in Catholic geography as the other two, but he is the patron of medical workers and guilds of healing.

A short prayer to Saint Michael the Archangel
(The following was among prayers recited at the end of Mass in the pre-Vatican II liturgy:)

Blessed Michael the Archangel, defend us in the day of battle.
Be our safeguard against the wickedness and snares of the devil.
May God restrain him, we humbly pray;
and do thou, O prince of the heavenly host, by the power of God,
thrust down to hell Satan
and all the wicked spirits who wander through the world
for the ruin of souls. Amen.