Summary of Eoghan or Eugene of Ardstraw became a monk after training at St Ninian’s monastery in Galloway, Scotland. His Irish foundations were at Kilnamanagh near Dublin and Ardstraw in west Tyrone.

Patrick Duffy fills in some details about Eoghan. 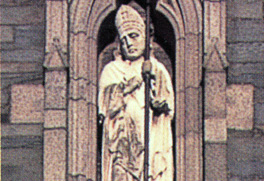 Although now known as Eugene (from the Greek meaning “well-born”), his proper name is Eoghan, meaning “born under [the protection of] the yew tree”. This may refer to the hope that he would grow up “hardy”.

Carried off to Britain
According to his Vita, Eoghan was born in Leinster, the son of Cainneach and Muindeacha, who may have been an already Christian family. He was one of a large number of young people, including Tiarnach of Clones and Cairbre of Coleraine, who were captured by pirates and carried off the Britain, where they  became students at Candida Casa (Whithorn in Galloway) founded by St Ninian. They may also have spent some time in Brittany (Armorica).

Kilnamanagh
Eoghan returned to Ireland and founded a monastery at Kilnamanagh, near Tallaght, Dublin. Here he stayed for fifteen years and trained “not a few bishops and very many priests”, including his nephew Caoimhín, St Kevin of Glendalough (d. c.618). 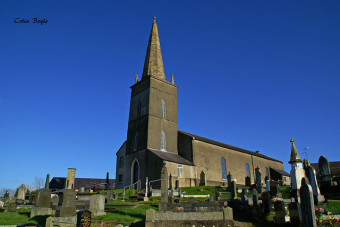 Ardstraw
His next foundation was around 540 at Ardstraw in west Tyrone, to which he may have come as a voluntary exile for Christ and started a monastic house, but the tradition insists that Eoghan was a bishop.

The Vita points out that Eoghan had a close relationship with Tiarnach of Clones and Cairbre of Coleraine and this may reflect alliances of religious houses threatened with takeover by Armagh.

Ardstraw had a prominent place in Church life and was probably an episcopal see until the 1150s, when it moved to Rathlure, then to Maghera, and by 1254 was integrated with Derry.

Influence
Both the Church of Ireland and the Catholic cathedrals in Derry are dedicated to St Eugene.