Simmary: Rome’s First Martyrs This feast, first mentioned in the Jerome Martyrology (6th century) was extended to the universal Church in the reform of the General Calendar in 1969. In the Tridentine Calendar there were so many feasts of Roman martyrs about whom there was little historical information that it was decided to incorporate them all under one general feast. 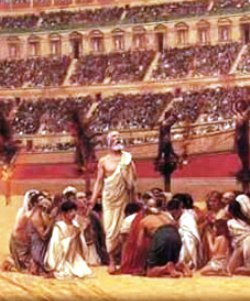 There was a large Jewish population in Rome in the first century AD and probably within ten or fifteen years after the death and resurrection of Jesus there was a good number of Christians there too. It may have been as a result of a controversy between Jews and Jewish Christians, that the Emperor Claudius expelled all Jews – and this would have included Christians – from Rome in 49-50 A.D.

Chrestus
Suetonius the historian in his Life of Claudius (25:4) says that ” … since the Jews were continually making disturbances at the instigation of Chrestus, he [Emperor Claudius] expelled them from Rome.”

Aquila and Priscilla
This coincides with what we read of Paul in Corinth: “There he met a Jew named Aquila, born in Pontus, who had recently come from Italy with his wife Priscilla, for the Emperor Claudius had ordered all the Jews to leave Rome” (Acts 18:2). Priscilla and Aquila seem to have returned to Rome as Paul greets them in the letter he sent to the Romans (Rom 16:3-5).

The fire of Rome under Nero 64 AD
In July 64 AD, more than half of Rome was destroyed by fire. Rumour blamed the tragedy on the young emperor Nero (54-68 AD), who had wanted to enlarge his palace. Christians may have been an easy target on whom to shift the blame. 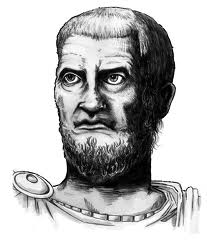 But all human efforts, all the emperor’s gifts and propitiations of the gods, were not enough to remove the scandal or banish the belief that the fire had been ordered. And so, to get rid of this rumour Nero set up as culprits and punished with the utmost cruelty a class hated for their abominations, who are commonly called Christians.

Christus, from whom their name is derived, was executed at the hands of the procurator Pontius Pilate in the reign of Tiberius. Checked for the moment, this pernicious superstition broke out again, not only in Judea, the source of the evil, but even in Rome, the place where everything that is sordid and degrading from every quarter of the globe finds a following.

Thus those who confessed (i.e.. to being Christians) were first arrested, then on evidence from them, a large multitude was convicted, not so much for the charge of arson as for their hatred of the human race.

Besides being put to death they were made objects of amusement; they were clothed in hides of beasts and torn to death by dogs; others were crucified, others were set on fire to illuminate the night after sunset.

Nero threw open his grounds for the display and put on a show at the circus where he mingled with the people dressed like a charioteer and driving about in his chariot.

All this gave rise to a feeling of pity, even towards these men who deserved the most exemplary punishment since it was felt they were being killed, not for the public good but to gratify the cruelty of an individual.” (Tacitus, Annales, 15:44)