Summary of the Feast:  Presentation of Mary. This memorial originally marked the dedication of a sixth century church of the Virgin Mary near the Temple of Jerusalem.

This feast is celebrated both in the Roman and the Eastern Orthodox rites. 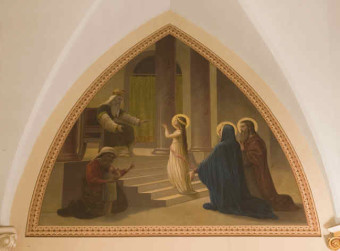 In the East it takes its origin from the dedication of the Church of Our Lady near the Temple area in Jerusalem which took place on 21st November 543. A church was built on the  above site in honour of this mystery.

Patrick Duffy recalls some of the themes of the feast.

The Eastern Church took it up as a celebration of Mary’s presentation to God in the Temple at the age of three, a non-biblical story from the apocryphal gospel of James. Established in the West late in the Middle Ages, the feast was universally observed by the sixteenth century. It celebrates Mary in her grace-filled life, wholly given over to the Holy Spirit from the time of her conception.

The feast is found in the liturgical documents of the East in the 11th century and was brought to the papal chapel in Avignon in 1373. A year later King Charles V introduced it to the royal Chapel in Paris, from where it spread through Spain and Germany. It is also now celebrated in the Roman Calendar.

Stressing the holiness of Mary
The feast is best linked with the other feasts of the birth of Mary (8th September) and of the Immaculate Conception (8th December). It highlights the holiness of Mary from the beginning of her life on earth that continued through her early childhood and beyond. 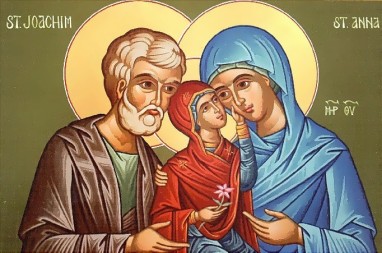 Icon of the feast
It is sometimes difficult for modern Westerners to appreciate a feast like this. The Eastern Church has a special icon for this feast included in the top of the iconostasis in every church. This stresses that Mary from the beginning of her life was dedicated to God. She became a greater temple than any made by human hands. God came to dwell in her in a marvelous way and sanctified her for her unique role in God’s saving work. At the same time, the magnificence of Mary redounds on her children. They, too, are temples of God and sanctified so that they may enjoy and share in God’s saving work.

“Hail, holy throne of God,
divine sanctuary, house of glory,
jewel most fair, chosen treasure house,
and mercy seat for the whole world,
heaven showing forth the glory of God.

Purest Virgin, worthy of all praise,
sanctuary dedicated to God and
raised above all human condition,
virgin soil, unplowed field,
flourishing vine,
fountain pouring out waters,
virgin bearing a child,
mother without knowing man,
hidden treasure of innocence,
ornament of sanctity,
by your most acceptable prayers,
strong with the authority of motherhood,
to our Lord and God, Creator of all,
your Son who was born of you without a father,
steer the ship of the Church and
bring it to a quiet harbour.”