In spite of her household duties and many hardships, Mary attained the heights of mystical holiness.

Patrick Duffy tells some of what is known about her. 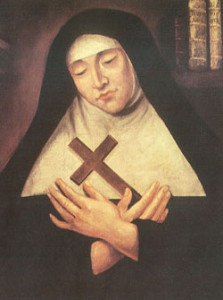 Marie Avrillot was born in Paris in 1566. Although at the age of sixteen she wished to become a nun, her parents insisted that she marry Pierre Acarie, vicomte de Villemore, by whom she had seven children. In spite of her household duties and many hardships, she attained the heights of mystical holiness.

Brought the Discalced Carmelite nuns to Paris
Under the influence of the writings of St Teresa of Avila, and after mystical contact with the saint herself, Marie spared no effort in introducing the Discalced Carmelite nuns to Paris, France. This she was able to achieve in 1604 with the help of King Henry IV of France and his wife, Marie de Médici.

Becomes a lay sister
After her husband’s death, she asked to be admitted among them as a lay sister, taking the name of Mary of the Incarnation; she was professed at the Carmel of Amiens in 1615. She was highly esteemed by some of the greatest men of her time, including St Francis de Sales: and she was distinguished by her spirit of prayer and her zeal for the propagation of the Catholic faith. She died at Pontoise on April 18, 1618.