Aug 17 Our Lady of Knock

Our Lady of Knock Shrine

Summary: Knock  Shrine onthe 21st August 1879 when Our Lady, St Joseph and St John, the Evangelist, and a lamb appeared at the south gable of Knock Parish Church. Knock is an internationally recognised Marian Shrine in the Co.Mayo in the west of Ireland, and was visited by Pope St John Paul II, in 1979 and more recently Pope Francis. The date of the memorial is within the annual novena conducted at the Shrine.

“At about 8.30pm, 15 people saw a light coming from the parish church so they made their way over to the gable wall to see what it was. “They saw the apparition of Our Lady, St Joseph, St John the Evangelist and a lamb. “They said the apparition lasted for two hours. “They all recited the rosary, and after the apparition news spread very quickly. Each of those witnesses were asked to give a testimony to a commission of enquiry.

“There was an investigation a couple months after and that’s when people started to descend on Knock – it spread to newspapers across Ireland, England and America. “People started to come here in the hope of receiving cures, and Knock became synonymous for that. And people came to the spot of the apparition to get some clay or holy water to send to abroad. “It has developed over the years and it has a very unique story in the sense that it’s the only shrine in the world where the Lamb of God has appeared.“As well as being a Marian shrine, it is a Eucharistic shrine. 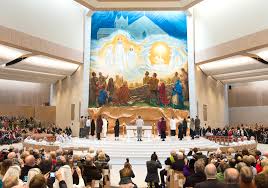 People have a special affinity with the place.“It has a beautiful atmosphere and that’s what draws people to it.”

Popes, St John Paul and Francis both visited this shrine in recent years.