Pope lashes out at the “stink of a corrupt society” 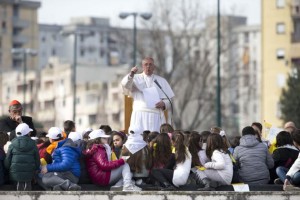 Pope Francis has spoken out strongly on a visit to the city of Naples against the “stink of a corrupt society” that leaves young people pray to exploitation in the workplace, marginalises immigrants and corrodes hope in society.

The Pontiff also railed against the lack of work describing unemployment and work exploitation as the drama of our time.

Citing the example of a young woman who was offered work with conditions of 11 hours for €600 per month with no contribution to her pension, the Pontiff criticised, “This is called slavery, this is called exploitation, this is not human, this is not Christian.”

Following his whirlwind visit to Pompeii early on Saturday morning, the Pontiff continued on to the massive Neapolitan suburb of Scampia, an impoverished neighbourhood on the outskirts of the city.

He received a rapturous welcome from the community there in John Paul II Square.

“I wanted to start my visit to Naples from here – from this periphery,” the Pope told the crowd.

He acknowledged that life in Naples has never been easy, but added that it had “never been sad!”

“This is your greatest asset. Daily life in this city, with its difficulties and its hardships and sometimes its trials, produces a culture of life that always helps people to pick themselves up again after every fall, and to ensure that evil never has the last word,” Pope Francis told the crowd.

“The path of evil is one that always steals hope and also robs honest and hardworking people, as well as the good reputation of this city.”

Later on Saturday, the Pope celebrated an open air Mass for tens of thousands of people packed into Piazza del Plebiscito, the main square of the southern Italian city.

During his homily, the Pope called on the city’s residents to embrace the words of Jesus and to work together for the “redemption for Naples.” He also called to conversion all those who lead criminal and corrupt lives.

“Dear Neapolitans, do not allow hope to be stolen from you,” he said.

“Do not give in to the lure of easy money or dishonest income. React firmly to organisations that exploit and corrupt the young, the poor and the weak, with the cynical drug trade and other crimes. May corruption and delinquency do not disfigure the face of this beautiful city,” the Argentine exhorted.

In Scampia, the Holy Father heard from three representatives of the populace including Corazon, an immigrant from the Philippines.

She told the Pope she was speaking on behalf of those from the community that are immigrants and those who are homeless and she asked Pope Francis to be an authentic voice them.

Responding, the Pope said, “We have to feel that our migrant brothers and sisters are citizens, are like us, God’s children, they are migrants like us, because we are all migrants bound for another country, no?”

Responding to the words of an unemployed man, the Pope highlighted the lack of jobs for young people under 25, some 40 percent of whom have no work.

“This is serious! What does a young unemployed person do? What is the future? What path can they choose in life? And this is a responsibility not only of the city, not only of the country, but the world!”

“There is an economic system that is denying people and now it is the young people’s turn to be discarded, that is without jobs.”

Responding to those who might suggest that charity is there to help the unemployed, the Pope rebuked them saying lack of work means they don’t have the chance to bring the bread home, to earn it.

“And when you do not earn your daily bread, you lose your dignity! And this lack of work steals dignity. We have to struggle with this, we have to defend our dignity as citizens, men, women, youth. And this is the drama of our time. We must not remain silent.”

Criticising part-time work, he explained that he was referring to “The exploitation of people in the workplace!”

“A few weeks ago, a girl who needed work found a job in a tourist agency and these were the conditions: 11 hours of work, €600 per month with no contribution for her pension. ‘Oh, but it’s just 11 hours! If you do not like it, look at the queue of people who are waiting for the job!’ This is called slavery, this is called exploitation, this is not human, this is not Christian. And if the person who does this says he is Christian, he is a liar, it is not true, he is not Christian.”

“Even the exploitation of black market labour, where you make people work without a contract, with nothing, and you pay them what you want, this is exploitation of people. Without contributions for their pension or healthcare…”

“We must resume the fight for our dignity, which is the struggle to seek, to find, to rediscover opportunities to bring home the bread! This is our battle”.

“If we close the door to immigrants, if we take away people’s work and their dignity, what do you call this? It’s called corruption! It’s called corruption and we all have the opportunity to be corrupt, none of us can say, I’ll never be corrupt. No! It is a temptation, it is slipping, there, there, there, into an easy business, into delinquency, into criminality, into the exploitation of people.”

Finally responding to the words of an Appeals Court prosecutor, the Pope said, “How much corruption there is in the world. If we find a dead animal and is corrupted, it’s ugly. But it also ‘stinks’, corruption ‘stinks’! A corrupt society stinks! A Christian who allows corruption to enter is not Christian, they stink! My presence is meant to be an impetus to a journey of hope, rebirth and recovery that is already underway.”

“Good politics is a service to people, which is exercised primarily at a local level, where the weight of failures, delays, real omission is more direct and hurts more.”

“Good politics is one of the highest expressions of charity, service, and love. Good politics depends on you all”.