Research highlights need for vigilance against child trafficking into Ireland 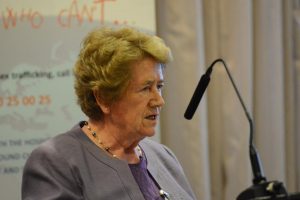 There were children among the 512 victims of human trafficking identified in Ireland between 2009 and 2016, said JP O’Sullivan last week at the launch of the MECPATHS report, where he added that the number of trafficked children was greater than one and suggested it could be in the hundreds.

“Do not let our country, our counties, our cities, our towns, our villages, our streets, our neighbourhoods, do not let them facilitate this child exploitation which the world accepts,” he said. “Our nation’s children deserve more than that.”

The MECPATHS (Mercy Efforts for Child Protection Against Trafficking with the Hospitality Sector) report explores the challenges of human trafficking and provides an analysis of the hospitality sector in Ireland. JP O’Sullivan, who works with MECPATHS and prepared the report, has called for an increased awareness in Ireland, an exploration of pre-crisis mobilisation and a resolution from Ireland to challenge the current lack of preparedness.

Sr Mary Ryan RSM, co-founder of MECPATHS, which was established in early 2013, described the organisation, stating: “We knew we had to do something to respond. The hotel sector seemed the most obvious. We were aware that hotels were being used around the world as temporary locations to hide children. We wanted to do something in Ireland to help prevent this.”

For this report, 35 hotel staff in Ireland completed a survey which showed that very few of them were aware of what human trafficking is and that training within the hospitality sector in Ireland is needed to safeguard and support the rescue of children.

Of the respondents, 90 per cent were unaware of their responsibility to report any act of suspected harm against a child to the Gardaí under ‘Children First’; 95 per cent were of the opinion that trafficking of children takes place in countries with lower incomes and higher poverty than Ireland and that in Ireland it does not happen; and 80% said there is a need for training on child trafficking during their induction period.

One respondent said that there had been times when young girls, who dress up to look older but who are not adults, arrived by taxi to be met by a guest who took them to their hotel room.

Another manager spoke of a senior colleague asking a male guest who arrived in the hotel with an 11-year-old boy for identification for them both. The man offered a cash tip and when the manager said he would call the police, the man left with the boy. That respondent said that if they had a protocol in place or any awareness, they would have been able to respond better.

In Ireland the Marriott International hotel chain has anti-human trafficking training in place since 2017. The PREM Hotel Group has its human resources head office in Dublin, has worked with MECPATHS to design a training programme for more than 500 staff in Ireland, and will introduce it to staff across Europe in the coming months.

In its conclusions and recommendations, the report stated that the Irish hospitality sector is unprepared for the challenges in countering child trafficking. It recommends that it could make an invaluable contribution by rolling out awareness training to staff on the indicators of child trafficking.

“We, at MECPATHS, remain fixed in our efforts to reach out to hotels, to reach out to offer supported learning to hoteliers and the hotel industry to make a difference. One person cannot do everything but everyone can do something. It is not up to someone else to react, it is up to us,” said JP O’Sullivan, who prepared the report.

It was launched by Kevin Hyland OBE, the former (and first) Independent Anti Slavery Commissioner in the UK and also Head of the Anti-Trafficking Unit of the London Metropolitan Police. He has recently joined ChildFund Ireland.

Also present at the launch were Det. Sgt Claire McKeon (HTICU), Paul Gunning (AHTU Dept. Justice), representatives from the Mercy congregation, the voluntary sector and the education sector, along with MECPATHS’ volunteers and a wide gathering of community members.