Home > News > Remembrance service to be broadcast on RTE TV

Remembrance service to be broadcast on RTE TV 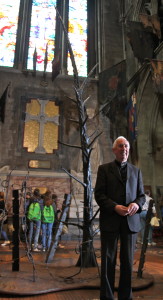 Dean of St Patrick’s, the Very Rev Victor Stacey, standing in front of the Tree of Remembrance in the cathedral.

Remembrance Sunday Service at St Patrick’s Cathedral in Dublin will be broadcast by RTE Television this weekend for the first time.

Remembrance Sunday marks the Armistice between the Allies and the Germans in 1918 and services take place all over the country on the Sunday nearest to the eleventh day of the eleventh month when 104 years ago at the eleventh hour peace was declared.

World War I lasted four years and claimed the lives of 37 million men, women and children.

This year, 2014, the centenary of the outbreak of war has been marked in Ireland, specifically the many Irish casualties.

On Sunday, President Higgins, who is still on a state visit to Africa, will be represented at the service by Colonel Brendan McAndrew, his Aide de Comp.

The service will also be attended by the Tánaiste, the Lord Mayor, the British Ambassador and representatives of the Defence Forces as well as veterans from other conflicts and their families.

The annual service features a wreath laying ceremony and this year the wreaths will be laid by Colonel McAndrew and Geoffrey Medcalf, MBE, national Vice President of the Royal British Legion.

They will lay their wreaths at the Tree of Remembrance which forms the centrepiece of the ‘Lives Remembered’ exhibition which is currently running at the cathedral.

The Dean of St Patrick’s, the Very Rev Victor Stacey told Paul Loughlin of Soulwaves Radio that the remembrance service “takes the form of remembering those who died and praying for peace in the future.”

He said it remembers those “who are peace-makers or involved in conflicts and wars throughout the world” – so it is not just about looking back.

Dean Stacey said two minutes of silence will be held to honour the dead.

“The emphasis is now on Irish regiments and people who would have had relatives fighting. I think this is something that has opened up just recently. World War I affected people of all classes, all nationalities and all religions and people were quiet about it for a long time.”

“Now a second or third generation on, people are discovering grand-uncles that they never knew they had, who went to war and were never heard of again. There is a resurgence of interest in these things,” Dean Stacey said.

As the National Cathedral of the Church of Ireland, St Patrick’s in Dublin has hosted the remembrance service since 1919.

In order to facilitate broadcasting, all those planning to attend the service must be seated by 2.45 pm.