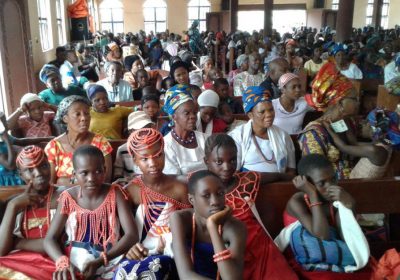 Nigerians learning about the dangers of human trafficking at a workshop organised by the Congregation of the Sacred Heart of Jesus in Benin City (Photo: Sr F. Nwaonuma)

Catholic religious sisters are serving on the front lines of the fight against modern-day slavery and human trafficking – often in hazardous situations.

In a bid to highlight how religious communities are leading the campaign against slavery today, the website Global Sisters Report asked sisters from a wide variety of congregations to describe their work in combating human trafficking and how they are educating villages, governments and the United Nations about the suffering caused by forced servitude.

The website noted that human trafficking is now one of the most lucrative businesses in the world today – it’s the third-largest international crime industry after drugs and arms trafficking. The International Labour Organisation reckons that globally there are 40.3 million victims of slavery, many of them from regions beset by armed conflict.

Sr Cecilia Oluchi Dimaku of the Nigeria-based Congregation of the Sisters of the Sacred Heart of Jesus, said the dehumanising practice of trafficking human beings for the sex trade and for forced labour is a new form of slavery belonging to the 21st century.

“It is a global problem, affecting the lives of millions of people around the world,” Sr Cecilia said.

“The United Nations reports that 70 per cent of trafficked victims are women and girls. Traffickers prey upon the most vulnerable women to make a profit from selling them to pimps, recruiters, sweatshops and brothel owners.

“Our congregation is committed to uplifting the dignity of all human persons, especially women and children. We are actively involved in combating human trafficking with projects and programmes aimed at prevention and rehabilitation of victims.”

American-born Sr Kathie Shea of the Medical Missionaries of Mary, an order founded by Irish woman Marie Martin in 1937, said her order has become very aware that human trafficking is not just about young girls or women being forced into prostitution – young boys and men are often the victims of slavery too.

“In East and West Africa and in the United States, Medical Missionaries are working to raise awareness about human trafficking and assisting victims – many of whom are actually trafficked in their own countries and sometimes by their own family members,” she said.

“We are particularly trying to raise awareness among young people and to provide needed counselling and/or medical services for them. When people are not educated or unemployed, it is all too easy to attract their attention with false promises of a better life.”

The MMMs have been running workshops across Africa to raise awareness about the plight of young people who have gone missing or who have been forced into false employment situations.

She said: “As our motto is to be ‘Rooted and Founded in Love’, then any man, woman or child who has been trafficked, or could be trafficked, clearly needs our unconditional love.”