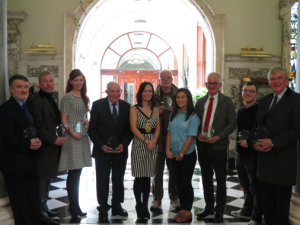 Belfast’s Lord Mayor has praised the city’s generosity and outreach to the world.

Mayor Nichola Mallon paid tribute to the work carried out by local aid agencies, including Trócaire and Concern, with an ‘Unsung Hero’ award.

She said, “The contribution of our NGOs is felt by the thousands of vulnerable people across the four corners of the world.”

“It is vitally important that we continue to show generosity and compassion to those most in need and that these important lessons can be passed on to future generations.”

The award was made as part of the ‘Belfast’s Generosity to the 4 Corners of the World’ event held in City Hall during the ‘4 Corners Festival’ which is organised by a small group of Christians.

The Lord Mayor, who is first female Irish nationalist politician to hold the position, has been busy with awards of late having recognised an 82-year-old volunteer of with the Society of St Vincent de Paul (SVP) with the ‘Best of Belfast’ award. 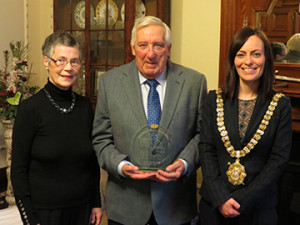 Raymond Brady from Finaghy, who received the award, stated that it is simply his duty to help his fellow man with “no questions asked”.

The Lord Mayor commented: “Raymond began volunteering for the St Vincent De Paul as a teenager and at the age of 82 he shows no sign of stopping.”

“His continuous care and compassion for some of the most vulnerable people and families in Belfast is a shining example to everyone in this city.”

Now more than 35 years after he began, Raymond Brady still goes on home visits to assess the needs of families and individuals experiencing poverty and social exclusion, and to provide financial and material assistance, friendship, moral support and a listening ear.

He said that his role as board member and treasurer for the last 10 years is part of enabling 1600 volunteers across Northern Ireland to help thousands of people every week.

Funds are also made available for special projects like Claire Lodge, SVP’s holiday home in Newcastle, Co Down which is currently being re-built.

“Through my volunteering I am all too aware of the prevalence of loneliness in my community and I am committed to combating it. Clare Lodge will be a vital facility which will allow those on their own, particularly older members of our society, to have a welcome break away and meet new people,” he said.