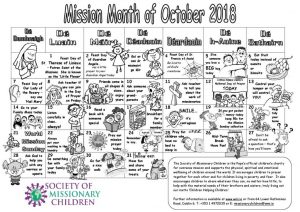 The poorest peoples of the world suffer most from the throwaway culture of greed and waste.

That’s the message from Ireland’s bishops on this World Mission Sunday.

This year the theme of Mission Sunday is “Christian Families are Missionary Families”, with the bishops saying they want families to be places of mission.

There will be a church plate collection in aid of World Missions Ireland (WMI) today.

In Ireland, WMI is the Church’s official charity for overseas mission and it comes under the direct authority of the Pope. WMI is part of a network of 120 pontifical mission societies, such as the Society of Missionary Children and the Missionary Union.

In his message for World Mission Sunday, Pope Francis noted that the Synod on Young People is taking place this month in Rome. He said of that event: “It will prove to be one more occasion to help us become missionary disciples, ever more passionately devoted to Jesus and His mission, to the ends of the earth. I ask Mary, Queen of the Apostles, Saint Francis Xavier, Saint Thérèse of the Child Jesus and Blessed Paolo Manna to intercede for all of us and to accompany us always.”

The chair of the Irish Bishops Council for Missions, Archbishop Kieran O’Reilly SMA welcomed this year’s theme. “Many families in Ireland have had a member or a neighbour who has served as a missionary outside Ireland,” he said.

Archbishop O’Reilly said that the Church’s month-long focus on missions during October was a good thing. “It gives us a special opportunity to appreciate their work and to support those currently on mission through our prayer and financial assistance. Pope Francis has invited us to be missionary disciples and so together may we become missionary families and participate in the planned events during this month.”

The Society of Missionary Children has produced a Mission Month activity calendar for October that is still worth downloading, whether you have a family or not. You can download it from their website.

The Columbans’ centenary is a reminder that Ireland can take pride in its missionary heritage. It is also a reminder of the price that missionaries pay for responding to Christ’s call to feed the hungry and clothe the naked.

The Missionary Society of St Columban was founded in 1918 and grew out of the Maynooth Mission to China. After a long and bitter civil war between nationalists and communists, the Maoist Government started to crack down on Church activity. In 1954, the last of 146 Columban missionaries serving China were expelled from the mainland. Columban fathers also serve in the Philippines, Korea, Burma and Japan. Of the seven known Columban martyrs, five died in the Philippines.

The Irish bishops’ comment about the consequences of greed and waste was prompted by reflecting on the witness given by the Columbans over the last century.

Today is one of only three days in the year where there is a church plate collection for one of the Pope’s charities. WMI director Fr Martin Kelly CSSp called on Mass-goers to be generous. He implored: “Dig a little deeper and pray a little stronger.”