Racism is increasing in Ireland 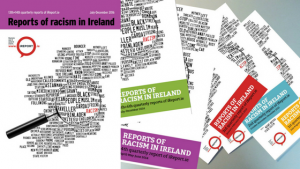 The highest levels yet of racist incidents have been reported in Ireland. New data shows that complaints were up from 190 for the previous six months to 246, of which at least 155 were criminal offences, including violence and threats to kill or cause serious injury.

On the publication of its latest six-month report, the anti-racism group ENAR Ireland (European Network Against Racism Ireland)* warned that “Growth in racist hate crimes [is] alarming”. The report was published yesterday, Tuesday 21 March, International Day for the Elimination of Racial Discrimination**.

“[This] represents a much higher level of reporting than the previous six-month period, and a significantly higher level than all previously recorded periods”, according to report author Dr Lucy Michael of the University of Ulster.

The report was compiled from information on racist incidents submitted to the iReport.ie racist incident reporting website. Half of the victims are Irish citizens, the report states, and this demonstrates “the intergenerational and embedded nature of racism against minorities in Ireland”.

The report suggested that action is needed to strengthen current laws and provide for better training, supervision and accountability of members of An Garda Síochána in dealing with racism, and in the provision of statutory support for victims.

World events have also led to increased anxiety about victimisation.

“The report clearly shows that we in Ireland are not immune to the Brexit and Trump effects. When racist violence and dehumanising attitudes against minorities are not treated seriously, hate speech from overseas finds fertile ground in Ireland,” said Shane O’Curry, Director of ENAR Ireland. “The result is an alarming growth in racist hate crimes in this period in the short and medium term. The longer-term damage is untold.”

He added that the Irish State lacks the tools and resources it needs to combat racism. “We need to be proactive in confronting racism. It is not good enough to blame minorities for the failure of society to integrate them when such high levels of racism are allowed to fester unchecked,” he said.

He called on legislators to ensure that Ireland meets EU and international obligations, and urgently provides hate crime legislation and a National Action Plan Against Racism. “We call on legislators to provide leadership in shaping the kind of policies which can allow us to live in a Republic that cherishes us all equally.”

The summary of the report stated that the very significant levels of fear among those who have been abused because of their race have led to mental health problems, ongoing anxiety, depression, avoidance of public places and normal life, as well as loss of confidence and work and study opportunities.

While those targeted by racism have worked at managing their emotional and physical responses to victimisation in order to carry on with everyday life, the extent of the injuries and the frequency with which they experience them leave them feeling entirely exposed and unsafe. 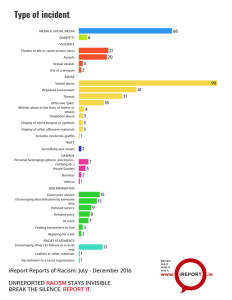 The data for this period also highlights that discrimination in employment, housing and service provision, and particularly in public services, must be addressed through effective publication of information about support and resolution measures, and through training and supervision of staff in public services to prevent discriminatory treatment and abuse.

The completed reports received between July and December 2016 included: 98 incidents of verbal abuse (some of which qualify as criminal offences); 57 incidents involving illegal discrimination; 6 cases involving offences of criminal damage caused by graffiti with offences of incitement to hatred in all 6; and 66 cases concerning incitement to hatred offences in media and social media publications.

*ENAR Ireland is a national network of 70 organisations working collectively to highlight and combat racism and the National Coordination for the European Network Against Racism. ENAR Ireland has been collecting reports on racist incidents through the online iReport.ie Racist Incident Reporting System since July 2013. See: www.enarireland.org.

**The International Day for the Elimination of Racial Discrimination is observed annually on 21 March. On that day in 1960, in Sharpeville, South Africa, police opened fire and killed 69 people at a peaceful demonstration against the apartheid pass laws. These pass laws required a form of ‘internal passport’, and were designed to segregate the population in South Africa during the apartheid era. Proclaiming the day in 1966, the United Nations General Assembly called on the international community to redouble its efforts to eliminate all forms of racial discrimination.