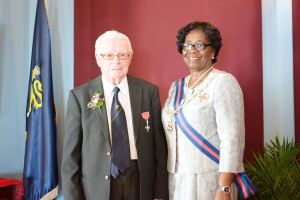 An 82-year-old Presentation Brother from Co Cork has been awarded an MBE by Queen Elizabeth II for his work with disadvantaged young people in the West Indies.

Brother De Lellis Sullivan was presented with the honour by the Governor General of St Lucia, Dame Pearlette Louisy in a ceremony attended by the Prime Minister of the Caribbean island country, Dr Kenny D. Anthony.

The citation read at the investiture ceremony commended Brother De Lellis for helping to “restore hope where despair prevailed” among the disadvantaged youth who attend the Centre for Adolescent Renewal and Education (CARE), many of whom are school dropouts.

After accepting his honour, Brother De Lellis said, “It’s really a very humbling to receive an award like this. I’ve spent my whole life working with young people. It’s been beautiful to serve God and serve young people as a Presentation Brother.”

The Centre, where the Irish Brother has devoted his skills and training since 1997, seeks to provide its young teenagers with the life skills they need to survive and the professional skills to find them work. “The Government and people of Saint Lucia are grateful to him,” the citation added.

A native of Glengarriff in Co Cork, Bro De Lellis was born Finbar Sullivan, one of eleven children of Michael and Hannah Sullivan, both now deceased. His brother, Fr Patrick O’Sullivan serves as the parish priest of Kilmacabea and is based in Leap in the county.

“I sailed out of Cork Harbour on the 13th of August 1954 with two other Presentation Brothers. I was 22 years of age. We crossed the Atlantic in a banana boat, the S.S. Golfito. It took us ten days to reach Barbados in the West Indies. I never thought then that I’d be getting an honour from the Queen nearly sixty years later!”

In 1961, he became the Superior of the Presentation Brothers in St Lucia. After serving for several years in Peru, Barbados, Trinidad and Grenada, he returned to serve as Tutor of Mathematics at St Mary’s College between the years 1993-97.

Since 1997, he has dedicated his skills and training to the work of the Centre for Adolescent Renewal and Education (CARE).

He is now the longest serving Presentation Brother missionary having worked in Barbados, Grenada, Peru, St Lucia and Trinidad for nearly 60 years.

Brother De Lellis is the third Irish Presentation Brother to receive an MBE. Brother Canice Collins and Brother Macartan Sheehy, both deceased, also received the award in 1949 and 1974 respectively.