Home > Featured > “Put out into the deep of the internet”

“Put out into the deep of the internet” 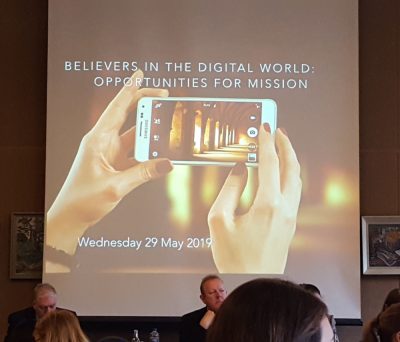 Marking the 53rd World Communications Day this weekend on Ascension Sunday, over 50 people attended a half-day seminar in St Patrick’s College Maynooth on Wednesday on the theme: ‘Believers in the Digital World: Opportunities for Mission’.

Opening the seminar, former presidential candidate Senator Joan Freeman said she had a “passion for the vulnerable, in particular our children” and has been working on legislation to safeguard children online.

“We’ve seen an increase in suicide in young teenagers. Young girls have been able to access sites which teach them how to take their lives. If one of your children walked into a room with a complete stranger and this stranger taught them how to kill themselves, wouldn’t you go ballistic?” she asked.

People hear constantly of the negative aspects of the internet, but Pope Francis has a very balanced view of the net with its challenges, but also as a “a source of knowledge and relationships that were once unthinkable,” she continued.

Social media was a focus of the Synod of Bishops on Youth in Rome last October, where the bishops spoke of the “exploitation of young people online”, Archbishop Eamon Martin of Armagh told the gathering, and “the young people pleaded with us that the Church should not just stand outside the digital world, looking in with disapproval”, but recognise that Digital Technology is “now a permanent part of the life and identity of the majority of young people, and increasingly so, of all of us.

“Some speak of the ‘ME’ or ‘selfie’ generation, which needs instant gratification and is nurtured by the narcissism and voyeurism of social networking – the extremes of this are seen in young people constantly checking their phones for likes and friends, obsessing for hours over their profile picture, or the macabre filming and instant sharing of tragic incidents like road accidents or the aftermath of terrorist attacks. What can believers say into this space?” he asked.

As a guide for the digital highways, Archbishop Martin proposed ten principles: 1. Be positive, communicating the ‘joy of the Gospel’. 2. Strictly avoid aggression and ‘preachiness’ online; try not to be judgemental. 3. Never bear false witness. 4. Fill the internet with charity and love and solidarity with the suffering in the world. 5. Have a “broad back” when criticisms and insults are made – when possible, gently correct. 6. Pray in the digital world! 7. Establish connections, relationships and build communion. 8. Educate young people to keep themselves safe and responsible online (from cyberbullying, porn and gambling). 9. Give a soul to the internet – witness to human dignity online. 10. Be missionary – a message can reach the ends of the earth in seconds!

Social networks are used by 2.4 billion people and 30 million messages are posted on Facebook every minute, Brenda Drumm from the Catholic Communications Office told the seminar. “We have to think about how our faith and belief lands into this chattering planet.

“Do not be afraid to put out into the deep of the internet. We have a great story to share. Let’s share it, but [do so] against the backdrop of the principles that Archbishop Martin has shared with us.”

Emma Tobin, a 22-year-old postgraduate student, shared her experience of growing up with social media, beginning with Facebook. “I’ve tried to ignore it, tried to pretend it didn’t matter to me if people ‘liked’ what I said or not, but in reality, it does matter. It mattered immensely, to me.”

Through Tumblr, a microblogging platform, she discovered “dozens of people” who shared her interests and through social media she has spoken to people all over the world – “people a thousand miles away who needed me after a difficult break-up, who needed me to tell them that they wouldn’t be working in a McDonald’s in central London forever.

“Social media is powerful. Less than six months ago I was reading pleas from bloggers I half-knew in Brazil, who claimed that the election of a new president might endanger their very lives. Some of those bloggers have since gone silent. I can scarcely imagine how small my world would be if I hadn’t sat on my bed in awe reading as my friend in Istanbul described getting water cannoned during political protests in her city, what she recommended for your eyes after getting tear-gassed. In a moment, I can read with my own eyes what Pope Francis is saying about climate, about migrants. Social media has touched almost every aspect of my life, I think ultimately for the better.”

Recently, walking through a shopping centre, she noticed the play of light on the polished floors. Everyone was watching their screens. “And for a moment, yes, I thought that was a shame. It is. But then I imagined those people lit up with invisible threads of light, signals, connecting them to faraway people, connecting them to invisible worlds and unheard conversations. And I thought it was beautiful too,” she concluded.