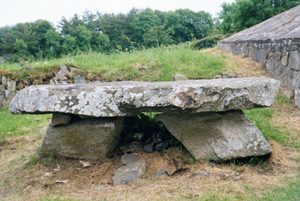 As the way has been cleared for the Referendum on the Eighth Amendment to take place in May 2018, a well known advocate for life, Kathy Sinnott, has appealed for public prayer and in particular for support for the Rosary at the Mass Rock initiative which takes place next Sunday, 18 March 2018 at mass rocks and other sacred places the length and breadth of Ireland.

“In the battle for life, we have to do the canvassing and everything else, yes, but we are not going to win without prayer because it is very much a spiritual battle,” said Kathy Sinnott.

On Thursday the cabinet released the wording which is to replace the Eighth Amendment, which guarantees the equal right to life of the mother and the unborn baby. If the amendment is passed, the following clause will be inserted into the constitution: “Provision may be made by law for the regulation of termination of pregnancies.”

Stressing the value of public prayer, Ms Sinnott referred to great historic events like Dunkirk, when everyone prayed. “Crucially, King George VI went on the airwaves calling the people to a National Day of Prayer for the Protection of the Army. History records that every church and chapel in Britain was full on May 26.

“In providence, God needs to be honoured privately and publicly because when He has granted the great grace, people don’t see the connection to the prayer. They may think, ‘Oh, I must have canvassed really well.’ So it seems to be part of these great and critical miracles [to have] at least one public manifestation,” she told CatholicIreland.

In November 2017, 30,000 people gathered at the coasts of Ireland to pray the Rosary for the Preservation of Life and Faith. Four months later, the Rosary on the Mass Rock campaign is appealing to tens of thousands of people to pray the rosary on Sunday 18 March at mass rocks or other sacred places around Ireland at 2.30 pm. 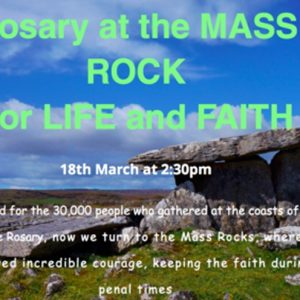 The complete running order and prayers for the prayer service, as well as the list of mass rocks and other sacred places where the rosary will be recited, is at: www.coastalrosaryireland.ie

The date was chosen because the day bridges the Feasts of St Patrick, protector of Ireland, and St Joseph, Protector of the Universal Church, explained Ms Sinnott.

The website lists 50 locations where the rosary will be recited, but according to the former MEP, people may also organise to pray the rosary at other local sacred places. “Once they have the location, we will put it up on the website. They can advertise it locally themselves.”

The logistics of organising the Rosary at the Mass Rock have not been easy. “We need co-ordinates for the rocks and some are on private land. A lot are in a poor state of repair.” While there will be fewer locations this time, they are hoping for larger numbers at each location, she said.