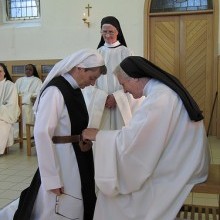 Two first professions and the anniversary of the dedication of St Mary’s Abbey church have just been celebrated at Glencairn Abbey.

“Just as this church is a light-filled space, you also are called to be a light for people: by the honesty and integrity of your life, by the depth of your self-knowledge, by living in the truth.”

Earlier in the month on the Feast of St Bernard (20 August), Sr Angela Finegan made her First Profession marking the end of her formal novitiate period of formation, and initiating her as a junior professed member of the community.

She is now allowed to wear the black Cistercian Scapular and belt. She will continue her initial formation for a further three year period, renewing her vows on a yearly basis. 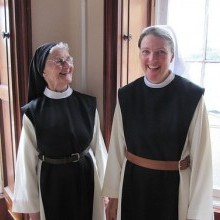 During July, the Rise of the Roses visited 10 religious communities over 10 weeks including Glencairn.

The aim was to connect the young people of Ireland (and the world) to God and to the women in the convents they visited.

“We learned from the Sisters that each and everyone of their callings was different but extremely special and God is a man of patience and mystery and that is what makes it all the more exciting,” wrote Aoibheann in her blog about the occasion.

“When we arrived at Glencarin, the scenery was breathtaking and the Sisters welcomed us with such tenderness and love. The sun shone brightly through the leaves of the trees and we knew that God was watching over us and the day was going to be amazing,” wrote Alaina in her blog.

She said that Bishop Alphonsus Cullinan said something that really touched her.

“He said you don’t need to climb Mount Everest or go to Hawaii and go surfing to find happiness or achievement, but when you climb to God that’s when you will find true happiness in yourself and your heart. And the Sisters are a true example of that, the are full of happiness and contentment with the life that they live and it is truly a beautiful life.”

She concluded that the visit was “truly a blessing.” 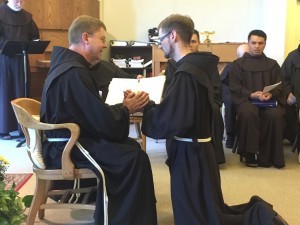 Br Denis Aherne OFM places his hands into the hands of the Provincial Minister of the Irish Franciscans, Friar Hugh McKenna OFM as he makes his 1st Profession of Vows.

On Saturday 15 August 2015, Sr Johanna made her First Profession as a Redemptoristine Sister at their enclosed convent in Dublin.

Also during August, Vocations Ireland reported that Br Denis Ahern made his First Profession of Vows on Sunday 2 August 2015 as a member of the Irish Franciscan Province. He spent time at the Franciscan Interprovincial Novitiate Friary in Burlington (WI) in the USA during his novitiate. 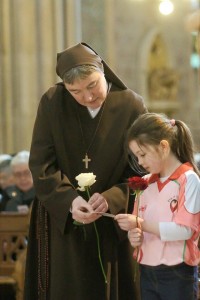 Vocations Ireland also noted the Sisters of Adoration Belfast announced on 6 August 2015, the Feast of the Transfiguration, that their new members, Sisters Elaine Kelly and Martina Purdy were received as novices and Anne Cahalan was received as a postulant into the convent on the Falls Road in Belfast.

The vocations body stated that it has been 18 years since the Sisters had anyone join them and over the last year they have had three young women answer the call.

“We are beginning to hear more stories like this throughout Ireland.”

“Congregations like the Franciscans, Dominicans and Salesians have all recently welcomed either new postulants, novices or have had someone make their first profession,” reported Vocations Ireland, which works with Vocation Directors of the Catholic Religious Orders in Ireland.