The outgoing Prior of St Patrick’s Sanctuary on Lough Derg has said he will miss the many people who form ‘the Lough Derg family’ as he moves on from a role he has held for twenty-three years.

In his 2013 clerical changes for the Diocese of Clogher, Bishop Liam McDaid announced that Mgr Richard Mohan would be taking up an appointment as parish priest of Clones, Co Monaghan.

The new Prior of Lough Derg, who will also replace Mgr Mohan as parish priest of Pettigo, is Fr Owen McEneaney, who is presently administrator of the Cathedral parish in Monaghan.

On learning of his appointment to Clones, Mgr Mohan said he was “sad to be leaving Pettigo and Lough Derg but happy that my place is being taken by a very competent, dedicated and conscientious priest.”

“I know he will be a good leader and, along with a very experienced team, he will ensure the continuance of the good work that has been going on at Lough Derg for centuries,” he said.

Speaking of his time at Lough Derg, Mgr Mohan added, “It has been a great honour to be Prior of Lough Derg, which has been a large part of my life for 40 years. Indeed I could say it has been my whole life for the past 23 years.”

He added, “I will always remember the thousands of pilgrims I made contact with over the past 40 seasons of pilgrimage. Indeed I can say that most of my friends and some of my very best friends are people I first met on Lough Derg.”

“I will miss the loyal team of dedicated people I have ministered and worked with; I will also miss the many people who were described recently by a pilgrim as ‘the Lough Derg family’. I am also very grateful to the people of Pettigo for their support over the years and to the many teams within the parish who have helped me carry out my duties as parish priest.”

Mgr Mohan said he was happy to be going to a parish with which he had strong connections.

“It is a neighbouring parish to my native Aghavea, (Brookboro & Coonian), Co Fermanagh. In fact, when I started school in 1949 I went to Mullinvaum Primary School in the parish of Clones. I look forward to the challenge of ministering full-time in a parish and to sharing in the lives of all who live there.” 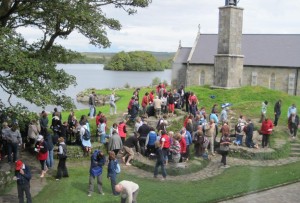 Lough Derg lies about four miles north of the village of Pettigo in Co Donegal. Station Island, the location of the pilgrimage, is often referred to as St Patrick’s Purgatory or simply Lough Derg.

This small lake-island, renowned in Irish Christian tradition since the time of St Patrick, has been receiving pilgrims continuously for well over 1000 years.

“I wish to join with a great number of pilgrims, and supporters of Lough Derg pilgrimages, who have indicated their wish to be associated with tributes and expressions of gratitude to Mgr Richard Mohan who retires as Prior at the end of this season,” Bishop McDaid said in his tribute adding that Mgr Mohan’s personal contribution to all developments had been “immense.”

“For over twenty years, he has become the face of Lough Derg, carefully preserving the traditions of the past while integrating modern facilities. He has developed these facilities to a high level of efficiency, enriched liturgical and sacramental practice, and increased the involvement of laity, youth and external facilitators.”

The development of One-Day Retreats outside the main pilgrimage season is credited with having opened Lough Derg up to a range of people of all ages.

Bishop McDaid said Fr McEneaney would bring a wealth of administrative and pastoral experience to his new role.

Fr McEneany was born in Raferagh, Co Monaghan in 1961. Having attended school locally and in Carrickmacross, he studied in St Patrick’s College, Maynooth, from where he was ordained in 1984.

His first appointment was to the parish of Tullycorbet (Ballybay) Co Monaghan where he served as curate for six years. He then served in Monaghan town until he was appointed Administrator in 2001.

The traditional Three-Day Pilgrimage season runs from 1 June until 15 August.

Pilgrims make ‘Stations’: they walk barefooted, kneel on the hallowed beds, fast and keep vigil. All the while they will be connecting with suffering and starving people of our world, while keeping in touch with the soil and the rocks of the earth, their feet firmly on the ground.

One-Day Retreats re-commence on Saturday 17 August and will continue on certain days each week until 23 September.