Primate pleads with NI’s politicians to return to Stormont 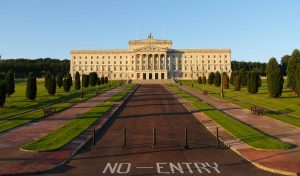 The leader of the Catholic Church in Ireland has appealed to politicians in Northern Ireland to return to Stormont before 21 October in order to halt “barbaric abortion legislation” which Westminster will impose in the absence of a functioning Assembly.

Speaking at the Papal Cross outside Drogheda, Co Louth on Sunday at a service to commemorate Pope John Paul II’s visit to Ireland 40 years ago, Archbishop Eamon Martin said the political impasse in the North had gone on for too long.

A radical abortion regime will be imposed by Westminster if Northern Ireland’s politicians fail to restore devolved institutions before 21 October.

“It is shocking that the democratic process was so cynically manipulated in Westminster during the July holiday period to remove from law all explicit protections for unborn children in Northern Ireland up to 28 weeks in their mother’s womb,” Dr Martin criticised.

“Make the necessary compromises and return to your posts – this is a critical moment,” he told them.

His comments were made ahead of a joint statement by the leaders of Northern Ireland’s main Churches on Monday expressing “grave concern” about the possible imposition of a liberal abortion regime by Westminster.

The statement was signed by the leaders of the Church of Ireland, Methodist Church, Roman Catholic Church, Presbyterian Church and the Irish Council of Churches.

The church leaders also called on their members and congregations to pray, call for change, and to lobby their locally elected representatives.

“We are, along with others, gravely concerned that the imposition of this Westminster legislation. There is no evidence that these changes reflect the will of the people, as they were not consulted. They go far beyond the ‘hard cases’ some have been talking about,” they highlighted.

The churchmen warned that the Westminster legislation, in addition to removing from law all explicit protection for the unborn child up to 28 weeks of pregnancy, offers no specific protection for unborn babies with a disability, nor does it prohibit abortion based on the sex of the baby, and it creates a potential vacuum of up to five months in Northern Ireland for unregulated abortion.

At present, abortion is only allowed under limited circumstances in Northern Ireland.

The church leaders invited all of their members to sign the online petition which Baroness Nuala O’Loan recently launched via Change.org ( http://chng.it/jkFMmSZB9n).

“We recognise that time is short, but that if our devolved institutions are re-established before 21 October, this Westminster-based legislation will not be imposed on Northern Ireland.”

Lord Alton also noted that when the issue was last voted on in 2016, Northern Ireland’s Assembly opposed any change to abortion laws by a wide margin.

“You might assume that anyone wishing to adjust the law would begin, as a matter of due process, with a public consultation with the people of Northern Ireland. But no such consultation has taken place,” Lord Alton criticised.

He said that the Government in London had rejected a proposal to consult members of the Stormont Assembly to establish whether there would be a majority in favour of changing the law.

It also ignored the 20,000 people who held an anti-abortion vigil outside Stormont.