Primate to lead Irish delegation to Iraq in November 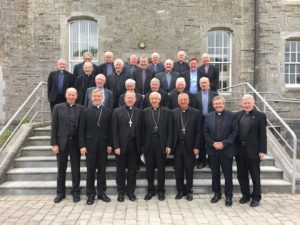 Archbishop Eamon Martin is to lead a delegation of Irish bishops in a visit to the Iraqi city of Erbil next November as a gesture of solidarity with persecuted Christians in the Middle East.

The move was announced by the hierarchy at the close of its summer general meeting in Maynooth yesterday, where the plight of persecuted Christians was one of the top issues discussed over the three-day meeting.

In their statement issued on Thursday evening, the Irish Bishops’ Conference (IBC) recalled Pope Francis’ words in Amoris Laetitia where he said, “The persecution of Christians and ethnic and religious minorities in many parts of the world, especially in the Middle East, are a great trial not only for the Church but also the entire international community. Every effort should be encouraged, even in a practical way, to assist families and Christian communities to remain in their native lands.”

The delegation travelling to the Kurdistan region of Iraq, which is now home to hundreds of thousands of displaced people, mostly Christians and Yazidis who were forced to flee from their homes in northern Iraq as a result of war, will be hosted by Archbishop Warda of Erbil.

It will have the opportunity to meet with communities displaced by conflict and who face an uncertain future in the region.

Trócaire, which has supported relief efforts for displaced people in northern Iraq, will have staff participating in the visit including its chairman, Bishop William Crean.

The delegation will also have the opportunity to meet with UN representatives as well as with other agencies responding to the crisis in the region.

At their meeting, the IBC also discussed the refugee crisis and called on the country’s policymakers not to “close their eyes to the needs of our brothers and sisters currently in dire need in our continent of Europe and further afield”.

“The numbers of those who are fleeing from war and persecution are on the increase and the level of solidarity is often inadequate,” they warned.

In their statement, the IBC said the parable of the Good Samaritan, which is almost the ‘national anthem’ of this Jubilee Year of Mercy proclaimed by Pope Francis, two figures of officialdom turn their eyes away and pass by the presence of a fellow human in distress.

While praising the brave and humanitarian role of the naval service in the Mediterranean – which was again exemplified this week – the bishops expressed concern that here in Ireland the process of taking refugees seems to have been allowed to slip to the back-burner of politics, notwithstanding the clear desire and willingness of citizens and communities to commit to a culture of welcome.

They asked that parishes offer special prayers at Mass during June to express their support and solidarity for the plight facing child, women and men refugees.

The meeting in Maynooth also heard that between April 2015 and April 2016 the Irish public donated €25 million to Trócaire, a period which included the annual Lenten campaign. This figure represents a 7% increase over the previous twelve months.

Separately, they prayed for the repose of former journalist Michael Keane and offered their prayerful condolences to his wife Jenny and her family.

The bishops paid tribute to Mr Keane’s work as chair of the editorial board of Intercom magazine.