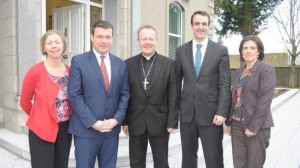 The Primate of All Ireland has urged representatives from North and South of Ireland to use the forthcoming UN climate change conference in Paris to “be a voice for the poor”.

Archbishop Eamon Martin on Wednesday hosted a meeting of Church leaders and the Environment Ministers Alan Kelly and Mark H Durkan in Armagh to discuss climate change ahead of the Paris conference from 30 November to 11 December 2015.

The Archbishop welcomed cross-border collaboration on the issue describing the joint meeting as an important example of leadership on “one of the most urgent global justice issues of our time”.

In a statement issued after the meeting, Dr Martin said the changes required of developed nations are significant.

He warned that there was a real risk that the major economic powers will dominate, eclipsing the human rights of the poor.

“What is needed is a robust international legal instrument, with ambitious targets and adequate mechanisms for enforcement and holding countries to account,” the Archbishop suggested.

He also highlighted that Pope Francis has appealed for a strong international commitment to the care of the earth – our common home – in solidarity with the poorest and most vulnerable populations throughout the world.

“For too many people in developed societies like ours, this is still not a priority issue, but climate change affects everyone and will have a critical impact on the life chances of future generations. The meeting of environment ministers and their teams today sends an important message to society that this is an urgent justice issue.”

He explained that the meeting in Armagh the Church leaders had drawn the ministers’ attention to the work of Trócaire in supporting some of the worst affected communities.

“This underlines the urgency of the proposed actions that will be before world leaders in Paris at the end of this month. This is most evident in the case of those who risk losing their homes and their capacity to produce food.”

Archbishop Martin said the summit in Paris provides a historic opportunity to re-balance the equation towards more just and sustainable development.

“We encourage the delegations from both jurisdictions on this island to use the opportunity of the forthcoming summit to be a voice for the poor. Moving to a more just and sustainable model of development will require all of us to re-think our lifestyles and how the choices we make in our consumption of goods and energy impact on the global poor and the generations to come.”

The Archbishop said that taking up the challenges outlined by Pope Francis in his recent Encyclical Letter Laudato Si, the Churches are ready to play their part, supporting political leaders by promoting reflection on the care of creation and taking action in homes, schools and local parish communities.

In a statement issued after the meeting, Minister Alan Kelly commented that Ireland strongly supports an ambitious, legally-binding global agreement with broad participation as a core outcome of COP 21 in Paris.

“The agreement will, I hope, enhance collective action towards a global transformation to a low-carbon climate resilient society while reassuring poor and vulnerable countries that they will be supported in their transition.”

“We are fully committed here in Ireland to playing our part in reaching this historic agreement and indeed are only weeks away from passing into law Ireland’s first ever climate change legislation which will underpin on a statutory basis our collective Government response to how we achieve an effective low carbon transition while building climate resilience.”

Minister Mark H Durkan responded, “I believe we have a moral responsibility to protect the poorest and most vulnerable groups and regions from the dangers of climate change and that it is critical that we take action now.”

“When I am at the annual Conference of Parties in Paris I will make it clear that we should be striving to secure an ambitious international agreement, and that the North of Ireland will play its full part in contributing to the agreed emission reduction targets.”

“I am committed to the introduction of Climate Change Legislation in the North. I intend to issue, in the near future, a discussion paper to stakeholders seeking their views on proposals for a NI Climate Change Act.”