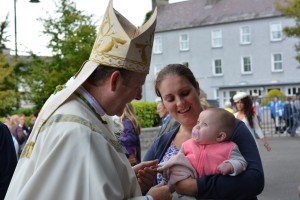 The Primate of All Ireland Archbishop Eamon Martin has said the plight of baby Charlie Gard has generated a huge outpouring of sympathy, causing many people to be caught up by a love for life, and respect for the dignity, beauty and preciousness of human life in so many circumstances.

Speaking to CatholicIreland.net in Knock, the Archbishop of Armagh appealed to people to pause for a moment and reflect again on the fragility of life.

He said one of the symbols of the vulnerability of life is the unborn child.

How we respond to the unborn, he suggested, was a measure of “how we are going to approach life in all of its aspects and facets throughout our own life”.

Dr Martin also described the Eighth Amendment as “a very beautiful and precious expression of the tenderness and value of life”, both for the mother’s life and the unborn child’s life – held together with great care.

Asked about his concern over the “disrespect for life”, Archbishop Martin said that in recent months many people had written to him and asked him to offer prayers for the protection of life.

“In the world at the moment, we see so much destruction and violence and war, we see people who are dying of hunger and people who have had to flee their homes because of persecution, we hear talk of people developing nuclear weapons – it is destroy, destroy, destroy life.”

He encouraged people to pray for the protection of human life at all times from the most vulnerable human lives – the unborn – to the elderly.

Asked about Taoiseach Leo Varadkar’s comments on RTÉ’s Prime Time programme in which he said Ireland’s abortion laws were “too restrictive”, the Archbishop said it was a line that was not unexpected.

“Fine Gael did tell us a few years ago that there was no intention to broaden abortion legislation and yet almost immediately it was there, there was this desire to expand it.”

Noting that 2017 marks the fiftieth anniversary of the 1967 Abortion Act (in the UK), Archbishop Martin said that “When you read the 1967 Abortion Act, it was intended at that time to be narrow and restrictive. People were told that this would not open the flood gates. This would not bring more and more circumstances and yet 50 years on, there have been many millions of abortions.”