Home > Featured > Priest’s website connects the sacred and the scientific 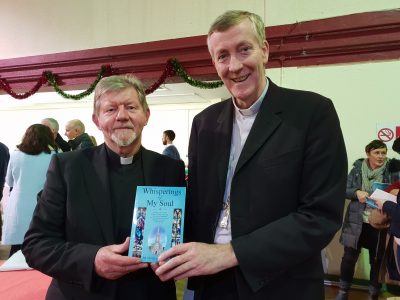 A Portarlington-based priest who was ordained in 2014 following the death of his wife has launched a new website which he hopes will help others suffering the pain of the loss of a loved one.

Fr Sean Hyland is a priest of the Diocese of Kildare and Leighlin.

His new online resource is linked to his book ‘Whisperings of My Soul’ which was published in 2018 and was a number one best-seller in Veritas stores around Ireland and continues to be one of their best-selling books.

It tells the story of how as a young married man, he lost his toddler daughter Seana, and then his baby son Kieran in tragic circumstances.

With his world crashing down around him, he was angry and despairing and didn’t know where to turn or what to believe anymore.

His inspirational story also tells of his grief after losing his beloved wife as well as his children and the messages from heaven he received in consolation.

In ‘Whisperings of My Soul’, Fr Sean relates how, in thanksgiving for these heavenly blessings, he entered a seminary in Rome and has devoted the remainder of his life to God as a Catholic priest.

Now a curate for two parishes in Co Offaly, he hopes to both inspire others suffering from the terrible pain of death and loss that he once felt and to help them find the connection between the sacred and the scientific.

“I read a lot of science and philosophy books after the children died. I wanted to know where my children were and I decided I would figure out how the world worked even if it involved wading through books on quantum physics. At the time everything around me felt like chaos. It was so random. Our babies were here one minute and gone the next. Is that it? I asked. How can that be it?”

“The more I read, the more I discovered that there is irrefutable scientific evidence for the handprints of Intelligent Design behind the origins of the universe. Then I thought surely someone so smart and all-powerful would have left a book of instructions about how he wants this world to operate and why. For me, the only book that even comes close to this is the Bible.”

RTÉ Nationwide’s will cover the story of Fr Sean and his book and website on Wednesday 6 November.

Fr Sean believes that most people form a world view in their teens or early twenties. After that, people resist any challenge to their world view. He says a worldview of atheism, a belief that God does not exist, can be established very early in a person’s life.

He also believes there is no disconnect between science and faith. In fact, the more that people learn about science, the more it should strengthen their faith.

“Unless people face a catastrophe like I did, where I questioned everything, people’s worldview will stay the same. They will spend the rest of their lives seeking confirmation of their world view and rejecting all evidence that contradicts it.

The idea of the website is to have a resource that will engage young people while they are still curious and still open to discussion and have an appetite for knowledge. I also believe that it is time that we in the Church challenged groupthink and phrases like: Sure, no one believes in God anymore and Science has proven there’s no God.

According to Fr Sean, preparing children for First Holy Communion and Confirmation is one of the joys of his late vocation.

“It’s life-enhancing to work with children as they are so enthusiastic and eager to learn. And yet, for me the most disheartening part is that most of these children will disappear from the altar within a few years. It’s something that other priests and I talk about regularly. We put in a lot of hard work preparing the children, and then they all vanish from the Church as soon as they’re teenagers.”

He says he has been trying to work out a way to stem the tide of young people leaving the Church.

“If we as priests continue to focus most or all of our efforts on preaching to the choir, we will wind up one Sunday morning with no one in the congregation. It’s the inevitable outcome of this trend.”

He has engaged with the secondary school students in Colaiste Íosagáin, in Portarlington and also, with other youths at national events around Ireland last year.

“I saw their appetite for knowledge, but I also saw that their books are out of date when it comes to scientific discoveries, and revelations about intelligent design. And the books make no connection between the developments in science and the religious implications,” he explained.

“We need to provide young people with the irrefutable evidence for Intelligent Design in the universe. I want to show them that it’s a very small step from Intelligent Design to a Divine Creator and that’s how the idea of the website came about. I hope it will be a catalyst for starting a conversation with these young people and creating influencers and thought leaders who will spread the word to their peers.”

Jesuit novice and astrophysicist, Dr Paolo Beltrame, who worked in CERN (European Organisation for Nuclear Research) in Switzerland has joined the Whisperings of My Soul web project as a collaborator. CERN is the largest particle physics laboratory in the world.

Fr Hyland cites a recent poll by Yakult UK which reveals that 89 percent of young people aged 18-29 feel their lives are meaningless and without purpose.

“I can see a yearning among young people here to find something more. But all these urban myths about science proving there’s no God, get in the way of them exploring their spirituality.”