Home > Featured > Priest spat on and assaulted by Orangemen in Glasgow

Priest spat on and assaulted by Orangemen in Glasgow 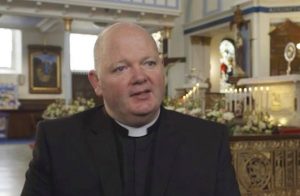 Canon Tom White who was attacked by an Orange mob in Glasgow on Saturday evening (Pic Archdiocese of Glasgow).

Scottish police are investigating an attack on a priest and his parishioners in Glasgow at the weekend as a hate crime.

Parish priest Canon Tom White was allegedly spat at and assaulted by supporters of the Orange Order, while he and his parishioners suffered a deluge of abuse, including being called “Fenian bastards” during the attack which occurred after Saturday’s vigil Mass.

Police had previously described the incident as “minor”.

In advance of the parade, police had been guarding the church to prevent it from being attacked by Orangemen, but they were called away to another nearby incident leaving the priest and his parishioners defenceless.

The Archdiocese of Glasgow issued a statement detailing what happened during the attack. “The priest was spat upon. Spittle landed on the back of his head. He wiped it away. Another mouthful of thick spittle was spat into his eye socket. Again he wiped it away leaving his hand full of the vile liquid.

“He was then further insulted and lunged at by a man carrying a pole before police arrived to restore some kind of order.”

In the wake of the incident, the Archdiocese has publicly put two questions to Police Scotland and to Glasgow City Council: “What kind of society is it that allows ministers of religion and church goers to be intimidated and attacked by a group which has a long history of fomenting fear and anxiety on city streets? Why is the Orange Order still allowed to schedule its intimidating parades on streets containing Catholic churches at times when people are trying to get in and out for Mass?”

The incident comes only five days before the climax of the Orange marching season on 12 July, when members of the Protestant fraternity celebrate the anniversary of the Battle of the Boyne in 1690. In Northern Ireland and in Scotland, Orange parades significantly add to inter-community tensions, particularly when they are deliberately routed through areas where the residents are predominantly Catholic. Because of a long history of disreputable behaviour, some of the most controversial of these Orange Order parades, such as one along the Garvaghy Road in Portadown, Co. Armagh, have been outlawed.

Several Scottish politicians were quick to condemn the attack in Glasgow. Monica Lennon of the Labour Party called it “disgraceful” and said she was shocked to hear Police Scotland describe it as a minor incident. She said, “Anti-Catholic hate crime remains prevalent in Scotland, accounting for 57 per cent of religiously aggravated charges in 2016–17.” Another Labour Party Member of the Scottish Parliament, James Kelly, said: “This is not a minor incident, and there needs to be a thorough and full investigation from Police Scotland.”

Calling for charges to be brought against the attackers, Mike Russell of the Scottish National Party said the incident was “utterly shocking and despicable”. He added: “No march that ends with such scenes should be allowed on that route in future.”

The Labour Party MP Paul Sweeney said there was nothing new in such sectarian hatred. “I remember leaving chapel as a youngster as the parades passed by and being terrified at the shouting and noise. These marches normalise bigotry and division amongst working people. It’s time to move on as a society.”

Former Westminster MP George Galloway tweeted: “If Muslims marched past a synagogue singing ‘We hate Jews’ and attacked a rabbi, the whole country, rightly, would be up in arms. Yesterday, a priest was assaulted amid anti-Catholic abuse. Just another Orange walk. Only the burning torches were missing.”