Priest rounds on culture of celebrity in Irish media 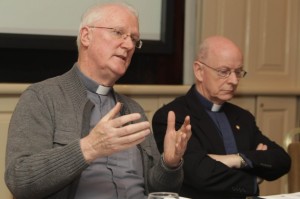 RTE needs to stop creating celebrities a prominent member of the Association of Catholic Priests has said.

In his weekly blog, Fr Brendan Hoban criticised the creation of celebrity presenters on RTE and TV3, and accused presenter Vincent Browne of fronting “an unintelligible rant” rather than “a helpful examination of what faith means” in his ‘Challenging God‘ series.

He suggested that they sought to be “popular not because of their expertise or ability but because they succeed in carving out reputations for themselves and end up being regarded by the great unwashed as ‘movers and shakers’ in the media world.”

In a highly critical analysis of Vincent Browne’s ‘Challenging God’ series on TV3, he said the presenter “makes no secret of his disdain for those who seek to defend religion or even to try to explain what faith means.”

He added that ‘Challenging God’ is no more than “a vehicle for Vincent Browne to do what he does best – coax a series of likely suspects (theologians, biblical scholars, clergy) into a studio and attack them for their beliefs. Or go on an unintelligible rant and air a series of predictable prejudices.”

Fr Hoban said this was all in the hope that people will watch this form of modern blood-sport and that advertisements will sell.

He also accused Vincent Browne of demonstrating how little he knows about religion and faith.

“While attacking politicians on his late night political show makes for interesting viewing for those who enjoy the equivalent of watching cars crash, Browne’s abrasive disrespect for his guests and his penchant for insulting them in passing is grotesquely embarrassing”, he said.

Commenting that there is a place for a programme examining issues of theology and faith as part of a public service remit, the ACP priest said a presenter who knew his or her subject and who could respectfully moderate a discussion between alternate viewpoints would facilitate a civilised discussion, even though it might attract a much smaller but more in-tune audience.

Fr Hoban also hit out at the ‘Pat Kennys’ of broadcasting who don’t want a public service remit where they facilitate intelligent discussions for reasonable salaries. “They want more money,” he said.

He said Pat Kenny’s €1million a year salary from RTE a few years ago was “crazy and unjustifiable”, regardless of how good he was or how hard he worked or how widely he spread his talents.

“RTE needs to stop creating celebrities. What we need are not ‘stars’ but competent presenters,” he suggested.

“When will RTE start developing a stable of presenters who can do a competent job and pay them an appropriate salary and start justifying their position as a public broadcaster?” he asked.

“Then instead of paying their elite broadcasters elite salaries at the expense of their public service broadcasting responsibilities, they can begin to live in the real world,” the ACP priest commented.