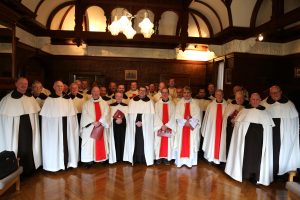 Archbishop Diarmuid Martin of Dublin issued a stern rebuke to those in the priesthood guilty of showmanship or “celebrity ministry”.

Speaking ahead of the World Day of Prayer for Vocations, which falls this weekend, the Archbishop said there was nothing farther from authentic ministry in the Church than showmanship.

“Celebrity ministry inevitably turns out to be celebration of myself and who I think I am.”

True ministry is the difficult challenge of allowing Jesus and his message and his ministry to appear through the priest, despite his sinfulness.

In his homily at the ordination of Carmelite Fr James Eivers at Terenure College in Dublin, Archbishop Martin stressed that priesthood is a ministry of witness to Jesus Christ. “Jesus allows us to be his ministers despite our poverty and our sinfulness. Indeed, it is recognition of our weakness which allows us to understand better and to witness more authentically to the mercy that Jesus brings to every sinner.”

But he underlined that, “When we become self-centred or use ministry for our own self-aggrandisement we can quickly fall into that arrogance which drives sinners away from Jesus and damages the very nature of the Church.”

Archbishop Martin also acknowledged that his generation of priests are handing on a “more fragile Church, fewer in numbers, weakened by scandal” and less credible due to their lifestyle.

He stressed that the Church is called to continual reform in every generation and to continually identify sinfulness in its ranks.

He said the history of the Church is a history in which humans and the human dimensions of institution have failed and been unfaithful and as result have become “sterile in witness”. 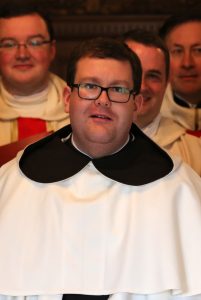 Elsewhere in his homily, he highlighted that there is an attitude in Ireland of relentlessly reminding the Church and its members of past sins which painted “every individual and every moment in the history of the Church with the same condemnation”.

Frustration with this constant condemnation had given rise to “justified resentment” among priests, religious and committed Catholics over being “unfairly” attacked as they live out their faith and ministry “generously and with dedication”. Many felt it was time to stand up and respond.

But the response, the Archbishop stressed, could not be to deny the mistakes and the wrongdoings of the past or get into “unfruitful or polemical quarrel”.

Instead, the response of the Christian to criticism is reform and conversion; “it is the call to renew the Church to be more effectively a witness to the God of love”, he said.

Fr James Eivers joined the Carmelite Order in 2007. He completed his novitiate in Aylesford, England.

Having returned to Ireland, he made his Simple Profession in August 2008, and joined the Carmelite Community in Gort Muire. At this time, he also began his studies of Philosophy and Theology in Maynooth.

Since completing his studies, James has been teaching in Terenure College. A talented musician, he has worked with several choirs in various Carmelite houses.

According to Fr Eivers, his introduction to the Carmelites came through a chance meeting with a friar who was interested in setting up a youth project and choir in the Carmelite parish of Knocklyon in Dublin.

“Coming from Longford, I had very little knowledge of Carmelites – only that they were enclosed nuns – not something I ever considered becoming!”

He explained that as music had always played a hugely important part in his life, it was through his role as a choir director that he came into contact with different Carmelite friars and subsequently started considering the possibility of life as a religious and priest.

“The search for satisfaction, meaning and fulfilment are fundamental goals of life. Like many young people of my generation I sought to achieve these objectives by filling my life with ‘things’, ‘clutter’ and ‘distractions’ – all the time trying to outrun that voice calling me to a different life. It’s hard to outrun God! When none of the above seemed to work, I began to question what it was in life that I held important. I became more and more attracted to the Carmelite way of life.

“As a Carmelite I have always been encouraged to ‘fan into a flame’ the gifts God has given me and I feel extraordinarily honoured to be able to walk with people in their moments of joy and grief, success and failure. But I also know that this is through no achievement of my own. It is only through God’s gift of my vocation to the Carmelite way of life that I have experienced these incredible honours and joys.”