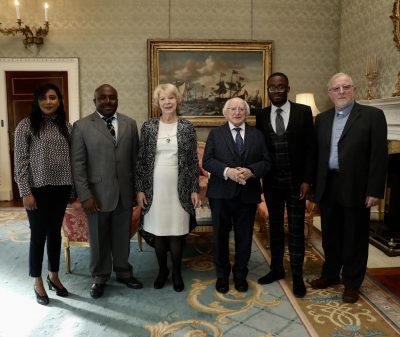 President Michael D. Higgins has paid tribute to the Spiritan Asylum Services Initiative (SPIRASI), which has been supporting victims of torture for 20 years.

At a reception on Tuesday at Áras an Uachtaráin to mark SPIRASI’s 20th anniversary, President Higgins welcomed victims of torture, along with staff involved in providing services and programmes.

He told them it was sobering that since its establishment in 1999 SPIRASI has provided rehabilitative supports to over 4,500 survivors of torture from over 100 different countries.

“SPIRASI gives enormous practical support to those hurt and helpless people who arrive on our shores in a desperate search for safety,” he said.

These supports include medical assessment, psychotherapy, outreach support, assistance to people to integrate into their new home and, of course, the reassurance of being listened to and believed.

“SPIRASI provides friendship when it is so desperately needed,” President Higgins stated.

He highlighted how the physical wounds of torture can be attended to through medical intervention, but the psychological wounds are much more profound and difficult to heal: the recurring nightmares, the sense of violation, the permanent feeling of fear – of not being safe.

“Today we acknowledge and salute the slow and patient work of supporting those men and women who are the victims of torture. This includes bearing witness to their experiences and working together to address the injuries, both physical and emotional, that have been inflicted.”

SPIRASI was founded by the Spiritan congregation in 1999. It is the only specialist service for the rehabilitation of victims of torture on the island of Ireland and is a member of the International Rehabilitation Council for Torture Victims.

“The importance of the work of organisations like SPIRASI, with which I am very familiar, and the valuable support they provide to victims of torture who have arrived on our shores as asylum seekers, cannot be over-emphasised,” the President said.

He said that those who have had torture inflicted upon them, and who continue to suffer as a result, have experienced a trauma that few others can truly comprehend.

“It can affect all facets of their existence – their sense of self, their relationships with others, their ability to cope with the everyday challenges of life. When this is accompanied by the physical dislocation and stress of seeking refuge far from home, it has the potential of becoming overwhelming.”

He said the reception at Áras an Uachtaráin was an opportunity for him, as President of Ireland, to acknowledge the valuable work SPIRASI does with asylum seekers, refugees and other migrant groups and to commend SPIRASI for the ongoing support work carried out in a number of reception centres with the newly arrived Syrian refugees and the innovative befriending programme that aims to support people’s integration into Irish society and culture.

“These are vital supports to individuals at a most vulnerable time in their lives. People who have suffered are still suffering and are far from home. This is the essence of true hospitality and of authentic solidarity with our brothers and sisters who have come to us in need.”

The President also sounded a note of warning when he stressed that it is not only in far-flung despotic regimes that a tolerance for torture can emerge.

“In recent decades so-called advanced democracies have also shown themselves capable of trampling on human rights and engaging directly or becoming complicit in imprisonment without trial and torture in the name of national security.”

Such tendencies, he warned, are ultimately counter-productive in terms of national security and serve only to strip a state that engages in such abuses of any moral authority to comment on the human rights abuses of others.

“Torture by any State cannot be justified or tolerated,” President Higgins stated.

He added, “SPIRASI’s anniversary gives us the opportunity to stop and reflect on what torture really represents: to explicitly acknowledge the terrible abuses of human rights that the word ‘torture’ truly denotes; to remember that every day, somewhere in the world, people are being subjected to horrific acts of intentional suffering, with the consent of state authorities and non-state actors.

“We must always remember that torture can never be legitimised or substantiated. The intentional infliction of pain is something that debases, not just the victim, but the perpetrator also. It is important that we reiterate, again and again, that torture should never, and must never, be justified or allowed by any society.”