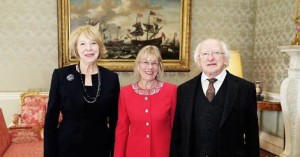 It was something of a reunion for the two. In 1982, Sally O’Neill and Michael D Higgins, who was at that time a newly elected TD, visited El Salvador to investigate reports of a massacre.

Initially they were refused entry to the country but later they were allowed in.

They found the sole surviving witness and uncovered evidence of a massacre of civilians. Their report from El Mozote made its way onto the pages of the international media, including the New York Times and the Washington Post.

“The publicity cast the then Galway East TD (Michael D Higgins) into the centre of an international diplomatic storm. Led by people such as Tipp O’Neill, the US Senate held hearings into allegations of American collusion,” wrote Sally O’Neill in an article in the Irish Independent to mark the visit of President Higgins to El Salvador in October 2013.

She added that Trócaire came under huge pressure from the US government which was accused of collusion with the forces who carried out numerous massacres in El Salvador.

The row between Trócaire and the US government came to a head when Bishop Eamon Casey, then chairman of Trócaire, boycotted a state function to welcome US President Reagan to Ireland in 1984.

“For a leading Church figure to take such a stance was hugely brave, but Bishop Casey knew the truth about El Salvador – he had worked closely with Archbishop Oscar Romero and had come under gunfire attack himself while attending the funeral of the murdered archbishop in 1980,” Sally O’Neill wrote.

The Trócaire worker has a long association with the country.

Within weeks of joining the Bishops’ aid agency in 1978, three bitter civil wars broke out in El Salvador, Guatemala and Nicaragua. She led delegations of politicians and bishops to Central America, so they could see the suffering.

She also did some translating for Archbishop Oscar Romero just six weeks before he was murdered.

She oversaw humanitarian aid to more than two million refugees in the Central American region in the following years.

Sally O’Neill also worked in Ethiopia during the famine in the mid-eighties and played a central role in Trócaire’s response to the famine in Somalia in the early 1990s, establishing its programme in Gedo, which still operates today.

In her most recent post, she has overseen Trócaire’s work in Central America across Guatemala, Honduras and Nicaragua.

“Sally O’Neill has had a truly remarkable career in overseas development and human rights. Through her belief in the dignity of all people, she has empowered so many to overcome the worst cases of poverty and injustice,” Éamonn Meehan, Trócaire’s executive director said in a tribute.

“Through her vision and commitment, Sally built the foundations of Trócaire, so that it could become the organisation it is today. I am convinced that this vision will continue to inspire the organisation into the future,” he added.

Sally O’Neill was appointed by the President of Ireland as a member of the High Level Panel for the Presidential Distinguished Service Award for the Irish Abroad in 2012 and was awarded the Hugh O’Flaherty Humanitarian Award in 2011.

After her retirement, she will continue in her role on the High Level Panel for the Presidential Distinguished Service Award for the Irish Abroad in addition to working in a voluntary capacity as a facilitator with prisoners in Honduras who have been wrongfully convicted, and migrants in transit.