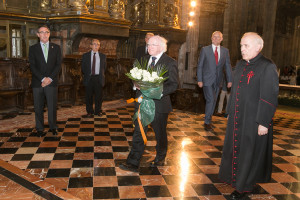 President Michael D. Higgins laying a floral tribute to the memory of those who died in the recent train tragedy in the Cathedral in Santiago de Compostela on 26 August 2013. Photo:Cesar Martinez.

During a visit to Galicia, President Higgins met the President of the Xunta de Galicia (Autonomous Government of the Region), Alberto Nuñez Féijóo in Porto do Son.

After discussing the historic and close cultural ties between Ireland and Galicia, President Higgins offered his personal condolences to President Nuñez Féijóo on the tragic loss of life that occurred in the recent rail disaster near Santiago de Compostela.

Accompanied by Mayor Currás, Archbishop Barrio and the Ambassador of Ireland to Spain, Mr Justin Harman, President Higgins visited the cathedral in the Galician city.

There, President Higgins laid a floral tribute to the memory of those who died in the recent tragedy.

The cathedral is the destination of thousands of pilgrims who undertake the Camino of St James, including many from Ireland.

The crash was Spain’s worst rail tragedy in more than 40 years. The derailment of up to eight carriages has been blamed on the train going too fast.

In addition to the 79 people who died, another 22 were seriously injured.

The driver, Francisco Jose Garzon Amo, has been charged with 79 counts of homicide and numerous offences of bodily harm, all of them committed through professional recklessness.